The Costumes of Halloween Past 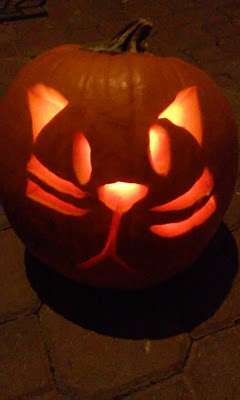 Kitty Design by my son

My eleven year old son started digging through my linen closet this morning.  He emerged holding our collection of Halloween nail polish - white, orange, black, and green. He handed me the green bottle and said, "Here, this is for the costume I am putting together for you."

"I think it is going to be like a witch. Don't mind me this afternoon while I rummage through your closet to look for things for you to wear."

So, in our normal fashion, here we are two days before Halloween (although, quite frankly, it has often been the night before) and my son and I are going to be scrambling to come up with a costume for me.  Every year I say I am not going to dress up, but then without fail, my elementary school students would beg me to. Last year was the first in several that I did not dress up because I wasn't teaching. And, even though I am not teaching this year either, I think my son just wants me to be all costumed up for trick-or-treating.

It had me thinking about some of my previous concoctions.  Now, remember, I have always come up with these costumes a day or two beforehand and very rarely purchase anything, but rather use items I already have in my house.  While creative, in my opinion, not all my costumes were appreciated.

There was the year I was a ladybug - still one of my favorite costumes and one of the few that had me adorning store-bought accessories - aka - the wings! Then there was the year I kind of, sort of....was a cat. But by the middle of the day I was tired of the kids pulling my tail so I ended the day simply dressed all in black.

Then, in a what I call my most creative - but oddly received - costume, I was the ocean.  I dressed in an ocean colored sarong, wore a long blue wig, and carried a stuffed animal dolphin and orca with me. I must have heard "What are you supposed to be?" a thousand times that day.  My most favorite costume, particularly among my students, was the crazy cat lady.  I wore clothes covered in fur - thanks to my beloved cat Hunter - my hair was a mess, and I had a bunch of beanie baby cats stuck to my body.  Simple and fun!

One year, when I was in charge of the Safety Patrol at the school, I took a risk.  Under the pressure from students and some staff, I borrowed a fifth grader's school uniform, put my hair in pigtails and threw a patrol belt across me.  Now, before you get any ideas, this was completely a G-rated costume. The jumper was at my knees and loose fitting.  Yet, still, the principal took one look at me, shook her head, and walked into her office.

My final year as a teacher (No, this isn't WHY it was my last year) I merely dressed up in Halloween colors - all black with orange and black tights.  Unfortunately, all the kids kept calling me a witch - which was a huge no-no at the Christian school - and so, once again, I was getting the evil eye from administration.

So, after a year off from having to publicly embarrass myself, I will once again be throwing together something to wear on Halloween night. Honestly, my older son has a Harry Potter cape in his closet I have been dying to wear, but I don't think that is what my youngest has in mind.

At least this year I can throw on my witch hat, put on green nail polish, and be the baddest witch in the neighborhood. As far as pictures are concerned, the few pictures I do have of these costume disasters have my former students in them and I certainly can't share those. Honestly, it is probably a blessing.