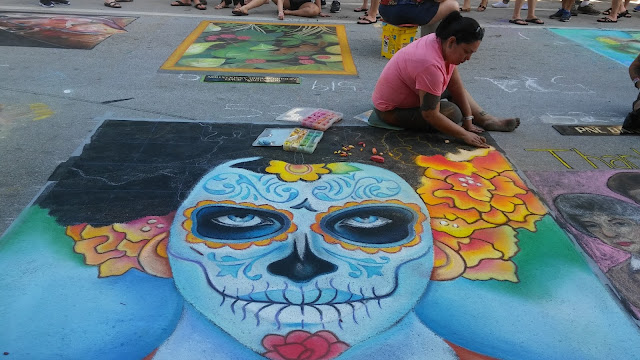 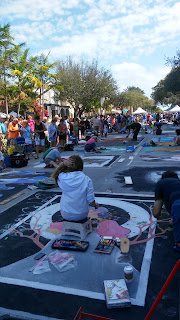 Alligators, sea creatures, cartoon characters, superheroes, and even a cat reading To Kill a Mockingbird were among those spotted in the streets at this weekend's 23rd annual Lake Worth Street Painting Festival. Since 1995, this local and FREE art festival has received the attention of art lovers and locals alike. The event was expected to draw 100,000 attendees this year to the small beach town in Palm Beach County.

The Street Painting Festival plays host to over 600 artists and musicians that turn the streets of downtown Lake Worth into the cultural hotspot of the month. In addition to chalk artists, other artists displayed their work in booths while musicians provided live entertainment. There were vendor booths featuring local businesses and food trucks for patrons to enjoy. 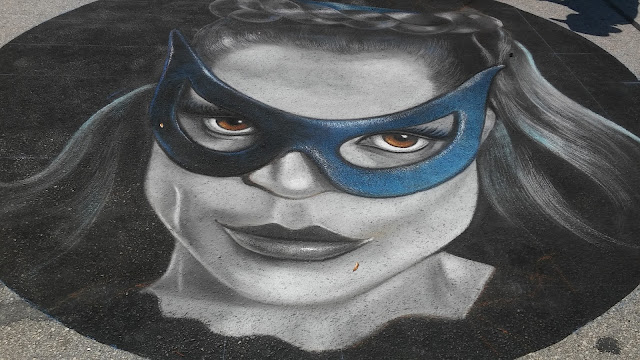 If you missed the festival this year, you may want to mark your calendar for next year's edition. It is definitely worth a visit at least once. While parking could be a challenge, event organizers have shuttle buses that run from the Tri-Rail Station and Palm Beach State College. This is a family and dog-friendly event.

Here are a few of my personal favorites. 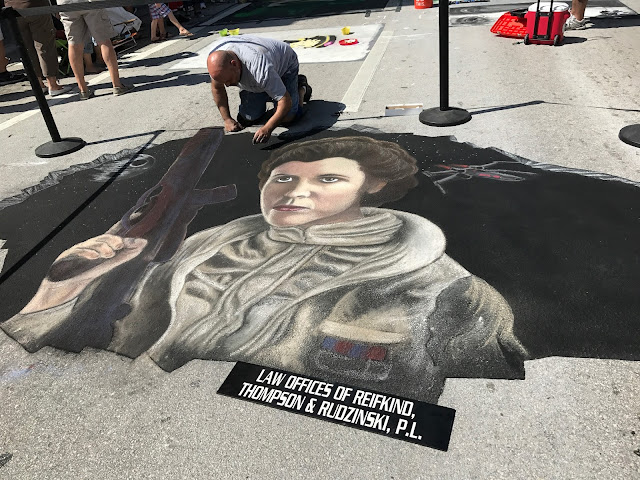 This piece of Princess Leia (Carrie Ficher) was a huge draw. 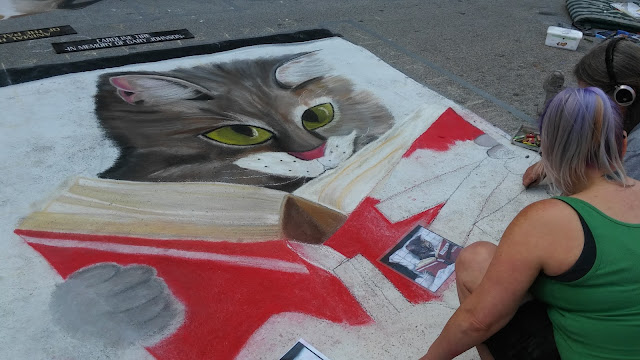 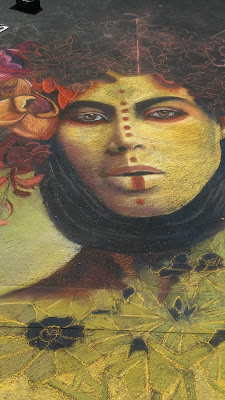 For more information and the 2018 schedule visit www.streetpaintingfestivalinc.org 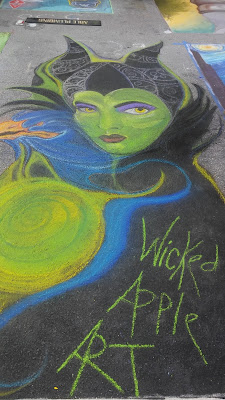 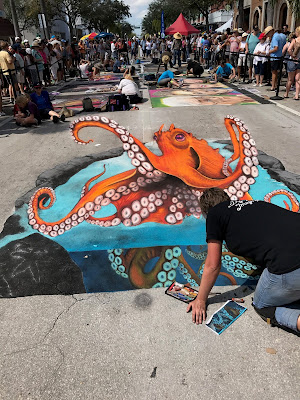 No One Needed to Know (Book Review) 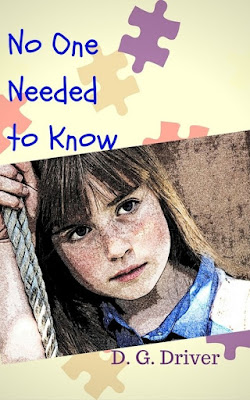 One of the best parts of being a blogger is that I have been able to connect with so many amazing people around the world. Author +Donna G. Driver is one of those people. For my latest book review, I read her novel No One Needed to Know, a story about a young girl coping with the challenges of having an older, autistic brother.

In this very sensitive novel about autism awareness and bullying, Driver develops characters that are realistic and evoke sympathy. Although written with middle grade students in mind, even I became quickly engrossed in the characters. I really adored Donald, but was sympathetic toward Heidi's situation as well. As a parent and former educator myself, my heart bled for these two children.

Adolescence is tough enough for Heidi without the embarrassment of her brother, Donald.  She is much more interested in sports than boys and could care less about what the popular girls consider cool. Still, she has managed to secure a spot in the inner circle of the popular clique - that is, until they find out Heidi's brother is "different." Donald is 16, but having been diagnosed with autism and ADHD, he acts much younger and needs constant care.

In keeping with the theme that people are afraid of that which they do not understand, once word gets out that Heidi's brother is developmentally disabled, a secret Heidi kept to herself for years, she becomes ostracized from her friends. Now, not only is her brother the victim of bullies, she too is being ridiculed and tormented by classmates who do not understand Donald or his condition. Naturally, Heidi becomes resentful of her brother whom she feels ruined her life!

This is an important novel that is as much about anti-bullying as it is about autism awareness. I hope schools and educators discover this story and encourage their classes to read it and discuss its relevant themes. It makes a perfect read for National Anti-bullying Day held each October. I am sure many middle grade children would benefit from Heidi's story.

I was lucky enough to chat with Driver about No One Needed to Know and what she has on the horizon! Look for her interview in my first Nik's Spotlight coming next week.

Cry of the Sea

Whisper of the Woods

Enjoying the Ride, One Pedal at a Time 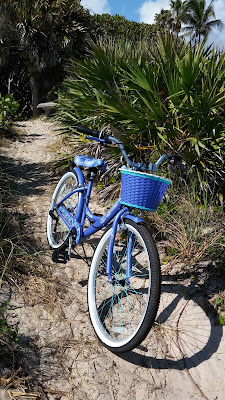 For those that tuned in this morning for my weekly movie review, I apologize.  However, you may recall that last month (Or was it December? The days are blending into each other.) I said I would be cutting back on the movie reviews and concentrating on more personal areas, which was the original purpose for starting this blog.

Therefore, finding myself with 37 minutes of free time (Yes, that is an exact number!), I figured I would catch you up on what is new in my life.

First, many of you may not know that back in November, after nearly two and a half years of being out of the traditional workplace, I accepted a position working for a non-profit in its Development and Community Affairs department. I mainly work in fundraising efforts, including grant writing. I am enjoying it, but to say that my family got spoiled with me being at home is an understatement. We are all still adjusting.

For that reason, my blog has taken a back seat most weeks. However, I am not stressing over it. I am enjoying my new adventure, and my blog will come along for the ride in whatever capacity it may be.  I do have a blog goal for this year and that is to re-design the site and, perhaps, move host platforms. I need to do some careful research on that. If you have any suggestions, please feel free to comment. 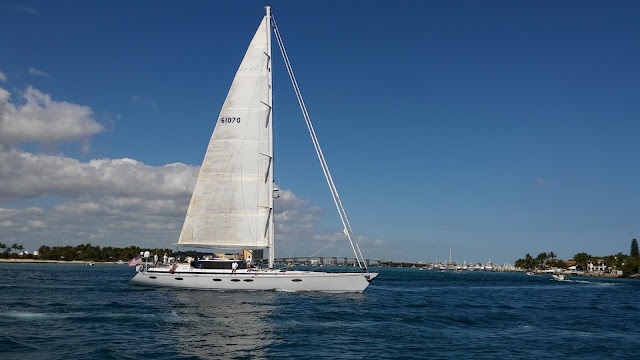 A more personal goal is to get out "there" more, try new things, and build relationships with people that encourage me to do so. This brings me to the main reason for today's post. I would like to introduce you to my newest pride and joy.  A couple of weeks ago, I purchased a new bicycle, complete with a basket! When I saw this  lavender bike, it was love at first sight. (If it appears more blue in the photo, you can blame my cheap LG phone.)

I still need to name her - any suggestions?

This is without a doubt the best money I ever spent.  I completely forgot how amazing it is to ride. I feel like a little girl again, and it is true what they say - you never forget how to ride a bicycle. AND, I'll admit, it doesn't hurt that I live in paradise and get to experience some gorgeous views at the same time. 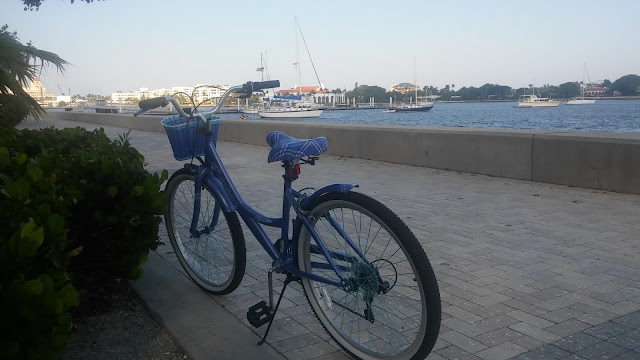 Well, my 37 minutes are almost up! Need to head to work soon. Until next time, stay well and pedal on!


Related Article: Day One: My New Adventure Begins. Read how it all started.

Now You See Me (Nik's Piks)

"The closer you look, the less you'll see." ~ Now You See Me 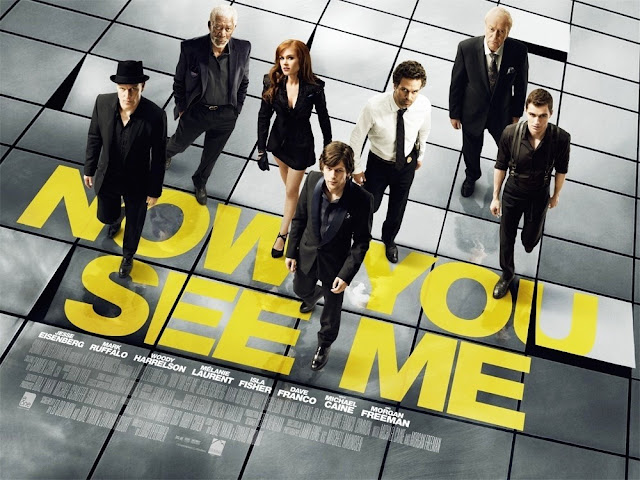 To be honest, the 2013 crime drama, Now You See Me, was off my radar. It was a reader that suggested the film (and its sequel) to me, and when I saw the cast, I was more than curious about it. The film is a very clever story of four street magicians who are brought together for an elaborate scheme of pulling off some of the most unbelievable heists. While on stage, in front of sold-out crowds, the group, who calls themselves The Four Horsemen, successfully pulls off some of the most mind-boggling illusions, including bank robberies - all to the benefit of the audience.

But how are they doing it? Their so-called trick does not go unnoticed by the FBI and Interpol, but how do officials prove the unexplainable. Mark Ruffalo and Melanie Laurent play the lead investigators in this very tricky case against the magicians, played by Jesse Eisenberg, Dave Franco, Isla Fisher, and Woody Harrelson.

"Come in close, because the more you think you see, the easier it will be to fool you." ~ Now You See Me

The only hope officials have is if they can convince retired magician, Thaddeus Bradley (played by Morgan Freeman - yep, told you the cast was amazing), to offer his explanation as to how the four are pulling off these massive heists. Michael Caine also stars in this high-energy, entertaining film that has you wondering the whole time, just who is playing whom?


Now You See Me is the ultimate game of deception, and even has action including a high-speed pursuit.  The film definitely kept my attention, and I am looking forward to seeing the sequel. If you're looking for a fun, light film, you will want to give this one a try.

The film is rate PG-13 for language, some action, and sexual content. 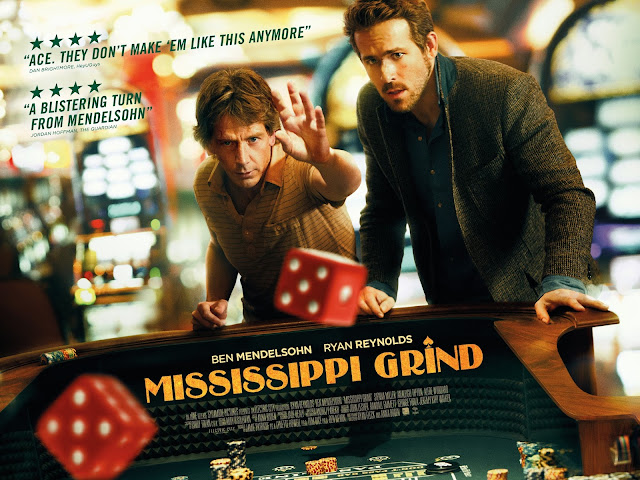