Going to the Dogs

This midterm election is perhaps the most heated in recent decades.  Yet, sitting on the ballot in Florida is a not-so-small amendment which can put an end to greyhound racing - one that has taken years to bring to a vote. Before I get to the heart of my post, I want to tell you that outside of Florida, only 6 other tracks remain open. Forty states have outlawed dog racing already, and, according to experts, it is in financial turmoil and no longer turning a profit. So why is it still occurring in Florida? Well, unfortunately, an antiquated law in the state mandates that dog racing be onsite of any venue that wants to offer other - more profitable - forms of gambling.

So, up until a couple of days ago, I thought to myself, this is a no-brainer. Any rational adult will VOTE YES on 13 to end this barbaric industry once and for all. But, lo and behold, apparently it is not such a clear issue to some. Why? Because of the greedy people that run this industry and the few others that truly believe the dogs should be racing.

"They were born to run," one person said to me. Well, technically, they were born to hunt which involves running, but the thought is crazier than ever if you think your Creator, the universe, or basic evolution meant for these dogs to be kept in cages 20-23 hours a day - cages too small for them to even stand up in and turn around - merely for our enjoyment. Haven't we learned enough about this type of abuse from circus animals? I'd rather see them running on the beach or at a dog park.

Still others are saying the dogs are treated "very well." REALLY?

"From 2008 through 2018, more than 15,000 greyhound injuries have been documented nationwide. This is a notable underestimate since injuries do not have to be reported in either Alabama or Florida. Despite Florida’s lack of transparency, some compelling data has trickled out. Dogs suffer broken legs, broken backs, and are even electrocuted. Since May of 2017, 73 dogs have been injured at Sanford Orlando Kennel Club including 55 dogs that suffered broken bones and four dogs that died."

And, finally, others are confused because the propaganda opposing Amendment 13 are confusing animal lovers - telling them that the dogs will all be euthanized, the breed will become extinct. Now, I am no expert in this, but I can tell you a few things. First, will some be put down? Perhaps, especially those who are in very bad medical condition due to neglect, but not the thousands the opposition is claiming. Secondly, I have to ask you this. Which is better? A life of misery and abuse, or to be rescued from that existence - yes, even if it means your death. I know I would rather not be suffering.

But I want to go back to the main reason for writing this post. I want you to meet Tankini - or as she was known in the racing industry, RK's Tankini Gal. She was finally adopted by a loving human at 6 years old. Prior to that, however, Tankini was bred merely for the greyhound industry and in her first six years of life, delivered 25 puppies - spending her days cramped in a cage too small for her to properly move around in and definitely not getting the human love she so deserved. Thankfully, Tankini had an amazing five years with someone that adored her. However, since she died at 11 years old, she spent 60% of her life alone, in a cage, with little to no affection or proper care. She was, as is the case with puppy mill dogs, a breeding machine, a tool used by humans for entertainment and profit.

Tankini was one of the lucky ones. She got out - got adopted - and her story ended happy. But, they are not all that lucky. "Since reporting of dog deaths became mandatory in Florida in 2013, 483 racing greyhounds have died. A greyhound dies at a Florida dog track every three days, on average, with 94% of the dogs being three years old or younger."

It is time, Florida, to change their fate. It is time to put an end to greyhound racing once and for all! VOTE YES ON AMENDMENT 13 - make a difference in the lives of these gentle giants.

Many thanks to Jim who shared Tankini's story, his photos, and most importantly, his memories of and love for her with me.

Lost on the Water (Book Review) 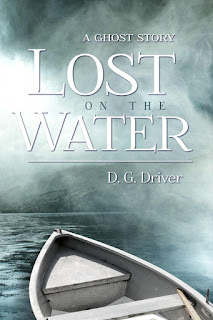 Just in time for Halloween comes my review of the ghost story Lost on the Water by D.G. Driver. Driver once again proves a master writer at creating a strong female protagonist that readers will enjoy accompanying on an adventure. She also always manages to touch base on social issues facing our society today.

The story takes place in a small town in Tennessee. Dannie, a California teenager, is visiting her grandmother for a couple of weeks while her parents jet off to Europe. She is about to unravel a slew of secrets that go back decades and reveal tragic events in her family history - secrets that explain bizarre events in her own childhood, and why she hasn't been back to visit her grandmother since she was three years old.

Dannie was dreading the entire visit - what would she do all day in the woods where her grandmother's cabin stood? The cell signal was terrible, after all, and she was convinced this was going to be the worst part of her summer. However, on only her first full day in the town, she meets some boys who befriend her and invite her on an adventure of a lifetime. Before the adventure is over, she will uncover the truth behind one of the town's ghost stories, and the boys will discover the truth about Dannie.

This is the fifth novel by Driver I have read and reviewed, and my favorite yet! This is an intriguing novel that will have you turning the pages until you get to the end. After reading her beautiful descriptions, I am ready to book my own cabin in the Tennessee mountains, ghosts and all! I highly recommend this novel to anyone who likes to go on adventures or has a fascination with old ghost stories.

Cry of the Sea
Whisper of the Woods

Echo of the Cliffs

No One Needed to Know