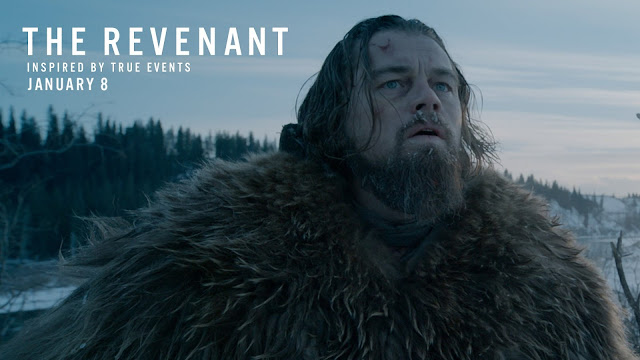 I finally sat down and watched The Revenant, not because I wanted to - I have successfully avoided it this long - but because I succumbed to the pressure and felt almost obligated. After all, the 2015 film earned twelve Oscar nominations, winning for Best Actor (Leonardo DiCaprio), Best Director, and, most deserved, Best Cinematography, along with many other industry awards.

"I'm not afraid to die anymore. I done it already." ~ The Revenant

After watching the film, I really think critics and the Academy are simply suckers for big-budget, epic tales. In actuality, the film was too long, by about 40 minutes. It was also overly violent and gruesome, to the point it seemed almost for mere shock-effect. And, maybe this was just my mood, but, quite frankly, I wanted Glass (DiCaprio) to fall victim to his injuries, mainly so I could just go to bed.

With all that said, the premise itself was riveting. In 1823, North American fur trapper Hugh Glass is brutally attacked by a bear who leaves him for dead. He is discovered by the rest of his hunting team and is left in the care of his son, Hawk, played by Forrest Goodluck, and two other trappers (Tom Hardy and Will Poulter) who are promised payment if they stay with Glass. However, when one deems Glass as a nuisance and threat to his and the others' own survival, he murders Hawk and leaves Glass to die in the wilderness. The remainder of the film is the dramatic fight for survival fueled by Glass's need for revenge.

The other thematic elements of determination, perseverance and the will to survive were conspicuous, to the point where I was detached from the character because I just didn't buy into it all, despite the fact the film is inspired by true events. Again, maybe that is my own baggage, LOL.

Was the film beautifully shot? Yes! Perhaps, that alone makes it worth watching. Was the story captivating? Most of it. But, overall, this film was not one I would run out and see again and would be cautious as to who I recommend it to. The Revenant is rated R for strong frontier combat and violence including gory images, a rape, language, and brief nudity.