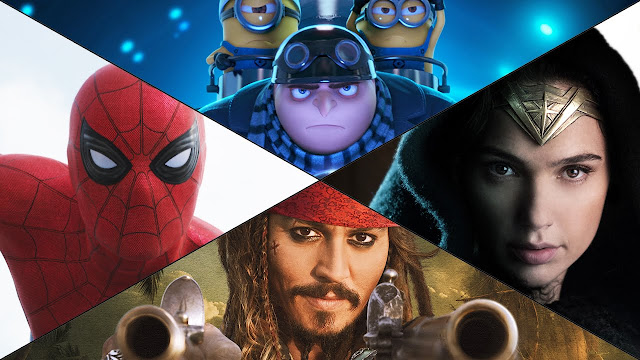 If you're a movie lover, you can't help but get excited about summer blockbuster season that begins in May and runs through August. For me, it marks the release of some much anticipated films. We are only in the first few days of June, and already the summer line-up is proving to offer relief from an otherwise dry year for the movie industry. So, hang on to your seats, as the world as we know it is taken over by guardians, aliens, and pirates!

First up was Marvel's Guardians of the Galaxy Vol 2 - which brought back all our beloved characters from the franchise's first installment. The film continued with its sentimental undertones, but, some would argue, carried the sentimentality a bit too far. I liked it, however. The film is fun, the story line was interesting, and Baby Groot is the cutest thing to hit the big screen since the Minions. The music is also an added bonus. Guardians is rated PG-13 for sci-fi action and violence, brief suggestion content, and language. So, while you youngins might love superheros, I advise against bringing them to this film. For older audiences, this is one film that was worth the IMAX 3D ticket price.

Next up is Alien Covenant, rated R for sci-fi violence, bloody images, language, and some sexuality/nudity. It is the sixth installment of the Alien franchise.  Before I go any further, besides trailers depicting the iconic scenes of the first few films starring Sigourney Weaver, I had no prior experience with the series. I just never considered it my cup of tea. Therefore, the night before seeing Alien Covenant, I watched the film's precursor, Prometheus, something I highly recommend you do, if you too are going into Alien as a newbie. I was surprised at how much I enjoyed Prometheus, a film with both a sophisticated plot and jump-scare moments.  Covenant had even more action and was a tad scarier, although the story line may have lacked the same depth. Still, I recommend this film to sci-fi horror fans.

Last, in my first summer blockbuster marathon, is Pirates of the Caribbean: Dead Men Tell No Tales.  This is a franchise I am all too familiar with, having seen each of the first four movies multiple times. And, just when you thought the view couldn't get better than Johnny Depp and Orlando Bloom, in comes Brenton Thwaites as Henry Turner. Most moviegoers will agree that none of the sequels lived up to the original film, but (and maybe I am just getting too sentimental in my old age), Disney delivered on this one. The film is non-stop action and wit, and finally provides some closure to the lives of the original cast. However, despite the fact that Captain Barbossa (Geoffrey Rush) finally finds his treasure, this franchise may not over. Rumor has it that the sixth film is already in the works.

I can say with 100% certainty, I was NOT expecting a Pirates film to get me choked up, yet it did - TWICE. The film definitely caters to fans (guilty as charged) who needed a bit of nostalgia.  Dead Men Tell No Tales is rated PG-13 for sequences of adventure violence and some suggestive content.  One word of caution, no matter how much your 6-year-old may love pirates, pirate ghosts may prove too scary for young viewers.

Pirates of the Caribbean 5: Official Trailer

So what's on deck next? Wonder Woman opened this past weekend and The Mummy is opening later this week. Then it's time for Spider-man: Homecoming, Despicable Me 3, and Valerian and the City of a Thousand Planets all hitting theaters soon.  I haven't exactly decided which of these films I am willing to open my wallet for, but check back soon for more movie fun.