When did hate and haters take over and become mainstream?  I am appalled on a regular basis by how cruelly people treat other people.  As a former elementary school teacher, I can assure you, this behavior starts YOUNG! 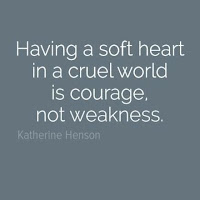 I'm sure you've all heard the horror stories of online bullying among our youth.  News segments often cover stories in which children and teens are bullied so badly online by peers that they suffer depression, anxiety, and in some extreme cases, even commit suicide. However, with the explosion of social media platforms, the number of incidences of people bullying total strangers is growing as well.  For some reason, people feel that being rude and disrespectful while hiding behind a computer screen or pseudonym is acceptable.

I have this weird policy of not posting photos of my children where their faces are visible. Friends find that odd.  Maybe with a background in criminal prosecution, I'm just a little more cautious of exposing my children to the fray of the worldwide web. However, the other day I tweeted a picture of my son (and in sticking with my policy, no face) in a sports jersey of his favorite hockey player.  While the photo received the attention from the represented team and countless others who found it endearing, I did experience for the first time online bullying - directed at my son!

What makes total strangers feel they can attack a 12 year old boy because they disagree with his choice of sports heroes?  This was not friendly banter between rival sports fans, this was full blown verbal attacks.  And, by attacks, I mean actually name calling such as "loser" "lost cause" "bandwagoner" and "crospussy."  Really?  Do these individuals feel that badly about themselves that they have to degrade a kid?  Maybe they do.  Are you all really this classless - the kid is 12!!  This behavior is beyond sad commentary on the state of our society.

Then, more hateful exchanges developed between the initiators and those defending my son's position.  It was insane! Thankfully, my son is not on Twitter and, he doesn't even know I posted the picture.  So these vicious comments never reached his ears.  But as a parent of two young boys who are on the cusp of entering the age of becoming active on social media, I have, yet another reason, to fear for their emotional safety.  This was a great reminder to me that when they do start opening up social media accounts, I will stick to my convictions on monitoring and privacy settings.

Read more of my blog here.