I'm actually one of those people that loves change.  I embrace it, I really do.  So this is not the first time in my life I've up and left a job for something completely new and different.  But, this is the first time I don't quite have specific plans in mind. 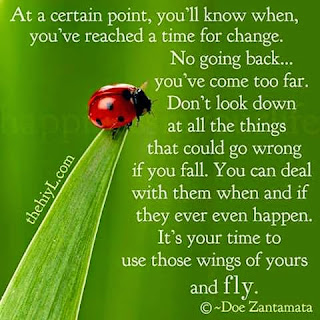 The first time was just before my 30th birthday.  I was a supervisor at the state prosecutor's office.  Admittedly, it was a good, secure career.  However, I reached a point where my professional growth and opportunity for advancement became stagnant.  I achieved and accomplished as much as I was going to there, unless I went to law school and become an attorney myself.  The lifers (employees there for the long haul) thought I was INSANE for leaving, one even declaring I would be back! Ah, FYI it's been 15 years, probably not going back.

I recall being scared out of my mind despite having my new job already lined up. The risk of leaving a stable job for a position in a small, privately-run business didn't seem to make sense.  This company just couldn't offer me the job security the government job did. But, turns out it was the best move I ever made.  I loved this job - P.R. work for an international tradeshow management company.  It was exciting, challenging, and professionally satisfying.  I was able to travel and meet and work with people from all over the world.  It was fantastic.

But, motherhood found me willingly closing the chapter on that position.  Ironically, the company closed their doors just one year later.  Like I said, not the most stable of businesses.

Now, here I am at 45 going through yet another metamorphosis.  After nearly a decade in education, I felt it was time to once again embrace change.  Older and wiser (and more financially secure) it hasn't been as scary as when I was 30 and single.  The bigger challenge has come from the fear of aging looming over me - the fear of time running out before I get to accomplish all I want to in my life.

As I write this, I'm staring at my wall calendar with the phrase "Your future is waiting around the corner" written on it.  And, while I have had an amazing 45 years of life, I want the next 45 years to be even better. Curious to see what's around that corner!