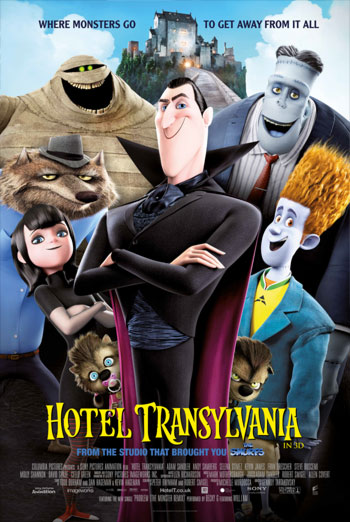 Holy rabies!  I completely forgot how laugh-out-loud funny Hotel Transylvania is.  It is unquestionably one of the funniest family films made in recent years. But what would you expect with an all-star cast of voice talent including Adam Sandler, Kevin James, Fran Drescher, David Spade, and Jon Lovitz - just to name a few!  If you haven't seen it, put it on your family movie night list before the sequel comes out this fall.


How does Count Dracula, a single-father to his daughter, Mavis (voice by Selena Gomez), keep her safe and away from her only threat, humans? He builds a fortress for monsters only! For over one hundred years the castle, which also serves as a popular vacation spot for monsters, remains undetected by humans.

Now, on the weekend of Mavis' 118th Birthday celebration, Dracula must deal with an unexpected guest - a human! Fearing for his life, Jonathan (played by Andy Samberg) must play along and hope the other monsters don't uncover his secret identity.  If the guests discover that a human has infiltrated the safety of the castle, the reputation of Hotel Transylvania and the Count will be ruined.

This is more than a story of a doting father trying to keep his daughter under his wing a little while longer. It's a lovely tale of a young vampire who, at 118 years old, wants to get out and experience the world on her own. When a romance blossoms between Jonathan and Mavis, it's too much for Dracula to handle and the shenanigans that ensue are both comical and sentimentally endearing.  Turns out the young human has a lot to teach the Count about life and love and letting go.

The screenplay is just brilliant, filled with more one-liners than viewers can possible catch in a single sitting. Any "inappropriate" lines will go right over the heads of younger viewers, but will keep older kids and adults enthralled.

The film is rated PG but suitable for most family members, at least those five and older. There is some rude humor and a few frightening images (Dracula's angry face!), but overall, this film makes a great family movie night.  You've never see a more lovable group of monsters.  Even the zombies are comical!  So get ready to laugh and jam out to some great music, too!


Click here for more of my family movie reviews.