When Despicable Me 2 hit theaters in 2013, my sons couldn't wait to see it. It remains one of their favorite films, and, with the much-anticipated series prequel coming out in July, Minions, we picked this one for our weekly family movie night. 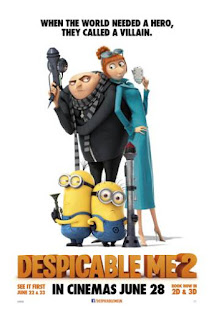 Despicable Me was so original and entertaining, it was going to be difficult for a sequel to beat or even live up to it.  In the first film we laughed and smiled along as the very talented Steve Carell, as Gru, goes from criminal mastermind to doting father when his heart is won over by three orphaned sisters.

In the sequel, Despicable Me 2, Gru continues to live a crime-free life opting for fatherhood instead of his super-villain status. He has become a respectable businessman with his trusty assistant and inventor, Dr. Nefario (Russell Brand), and his army of adorable Minions by his side.  And, with the exception of his daughters and a nosy neighbor trying to convince Gru to get out into the dating scene, they live a very happy and normal life.

Until, that is, The Anti-Villain League solicits the help of Gru to find the criminal responsible for destroying an entire lab and stealing the supply of PX-4-1 serum that causes drastic gene mutations when injected into subjects.  Working alongside Agent Lucy Wilde, played by Kristen Wiig, Gru goes undercover at a local mall to find the culprit. Will Gru find the villain behind the plan to unleash  an army of evil minions on the world? And, will he find love in the process?

Filled with laughs, action, spy gadgets and an awesome soundtrack (after all, it's the film that gave us "Happy"), Despicable Me 2 is James Bond for kids! Carell once again delivers a hilarious performance making this sequel just as enjoyable as the first.  A fun movie the entire family will love! The film is rated PG for rude humor and mild action.