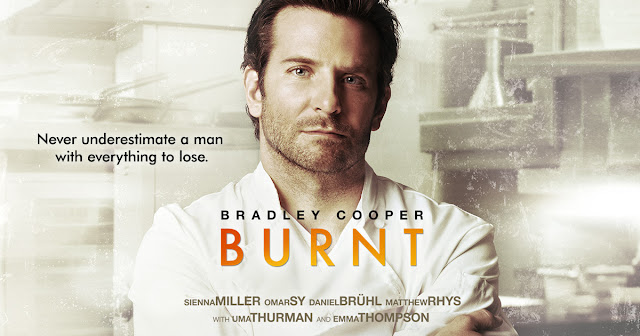 The 2015 film, Burnt, was yet another one that flew under the radar for me. Surprisingly so, considering it stars Bradley Cooper. The plot centers around a star chef whose drive toward perfectionism ruined him once, but has also given him the courage to seek out redemption. But, can he settle the diva inside him long enough to rise back to the top, or will his past return to haunt him?

"A chef should strive to be consistent in experience but not consistent in taste. It's like sex, it's like you're always headed to the same place, but you got to find new and dangerous ways of getting there." ~ Burnt

Adam Jones (Cooper) was one of Paris' top chefs at one of the most prestigious restaurants in the city owned by his mentor, Jean-Luc. When drugs and alcohol lead to his demise, he finds himself starting from scratch again in New Orleans as he gets sober. Now clean, Jones is determined to make it back to the top, this time in London. Unfortunately, he quickly learns that his temperamental behavior and past addiction left scars much deeper than the loss of his own success. He manages to manipulate his former mentor's son, Tony, played by Daniel Bruhl, to hire him at one of London's fine-dining establishments and reassembles a staff that consists of new and old (those willing to forgive him) colleagues. His eye is on a third Michelin star, the industries most prominent award, having previously earned two before his downfall.

However, it's been five years and the fine-dining palate and techniques have changed. Jones needs to learn to rely on his team and trust them while relinquishing some control. Something he has an issue with. In this highly competitive field where friends become enemies and enemies become friends, Jones will learn to accept responsibility for his past mistakes.  The film has a touch of romance, a dash of suspense, and a full serving of revenge but leaves forgiveness and the beauty of imperfect relationships at the forefront of the story. In many regards, it is the adult version of Disney / Pixar's Ratatouille, but, honestly, not as good.

"There's strength in needing others, not weakness." ~ Burnt

Burnt is rated R for language throughout and also stars Sienna Miller, Uma Thurman, Emma Thompson, Omar Sy, Matthew Rhys, Sam Keeley and Lily James.  This is one of those "nice, little films" - nothing spectacular with no deep character development. The film definitely did not evoke any emotions in me. However, even though I didn't love this movie, there were elements I enjoyed - London, Cooper, FOOD - plus I liked the premise of the story. All you gourmets and foodies will certainly appreciate the cooking aspect of the film.