Me Before You (Nik's Piks: Movie Review) 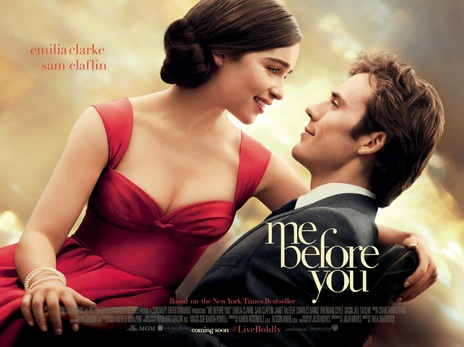 "You should be out there, claiming the world as your own." ~ Me Before You

The novel Me Before You by JoJo Moyes made my list of TOP FIVE Books of 2015. No doubt, then, I was really looking forward to the film. However, there is a reason I didn't rush off to the theater back in June to watch it, preferring, rather, to wait for it to become available on Blu-ray. TEARS! And, if you're prone to sobbing caused by an overload of emotions as I am, you may want to just curl up in a blanket and watch this one alone. This is one book-to-film adaptation they got right!

Why? Well, first, Moyes herself wrote the screenplay and, therefore, the film is very true to the book, the themes, and the characters. Second, the performances by the entire cast were spot-on, most notably Emilia Clarke, whose performance embodied the persona of our heroine Louisa beautifully while capturing her quirkiness and genuine spirit.

Louisa is in her mid-twenties, living at home, and working in a coffee shop. She has no real goals and is stuck in a town, in a life, that stifles her very existence. In a way, she is paralyzed figuratively. All this changes when she takes a job as a caregiver to a wealthy man, Will (Sam Claflin, who is amazing as well), who suffered an accident two years earlier that left him a quadriplegic. Prior to his injury, Will led a dream life with a successful career and a fulfilling personal life.

Will has grown bitter and angry and, at first, resists the kindness and friendship Louisa offers. Day after day she brings her smile, and he rejects it. Overtime, she tears down his walls and proves she is a light in his darkness, and the two develop an amazing relationship. They teach each other to live fully and love with absolute unselfishness. In the end, the film is a powerful reminder to all of us to live life to the fullest in what little time we are given.

"You need to widen your horizons, Clark. You only get one life. It's actually your duty to live it as fully as possible." ~ Me Before You

Me Before You is a human drama that will leave your heart smiling while your eyes swell with tears. This story touched me as few have. It is a remarkable love story that will last through the ages. The film is rated PG-13 for thematic elements (some of which I am purposely omitting so as not to spoil the plot for you) and some suggestive material. It also stars Janet McTeer, Matthew Lewis, Jenna Coleman, Charles Dance, Brendan Coyle, Samantha Spiro, and Steve Peacocke.  I highly recommend this film, especially to all the hopeless romantics out there.

Email ThisBlogThis!Share to TwitterShare to FacebookShare to Pinterest
Labels: After Hours, Drama, Me Before You, Movie Night, Movie Review, Nik's Piks