The End of the Tour (Nik's Piks: Movie Review) 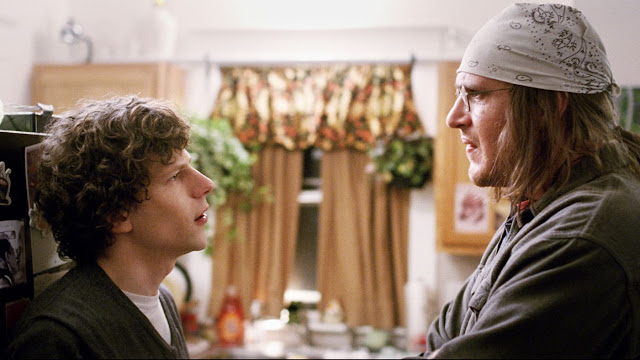 "He wants something better than he has. I want precisely what he has already." ~ The End of the Tour

Continuing with my book-to-film series is a lesser known 2015 film, The End of the Tour. Based on the memoir, Although of Course You End Up Becoming Yourself, by journalist and author, David Lipsky (Jesse Eisenberg), the film is based on Lipsky's account of his interview with renowned American author, David Foster Wallace (Jason Segel), for Rolling Stones Magazine.

As Wallace's 1996 book tour for Infinite Jest is coming to a close, Lipsky, hoping to impress his editor, negotiates a very personal interview with the mysterious author. The two men travel together for a few days, and Lipsky, who looks up to Wallace, sees a side of the brilliant author few were privy to. The entire movie is insightful, often thought-provoking, dialog between the two men as Wallace slowly opens up to Lipsky about his alcoholism, his loner lifestyle, and his "spiritual crisis".

"I don't think writers are smarter than other people. I think they may be more compelling in their stupidity." ~ The End of the Tour

As so many other geniuses, the story portrays Wallace as the tormented artist he was, one who suffered from addiction, depression, and insecurity, and how the more famous he became, the worse these inflictions became. As the film reveals Wallace's personal demons, it also demonstrates how the experience allowed Lipsky an introspective look into his own life and goals.

The End of the Tour is an unassuming drama that takes a hard look at the price of fame and ego. Segel and Eisenberg deliver truly spectacular performances which captivated me and drew me into these characters. If you like such stories as Tuesdays with Morrie, or simply like films that delve into human relationships and psyche, I would definitely give this one a try. The film is rated R for language and some sexual references.