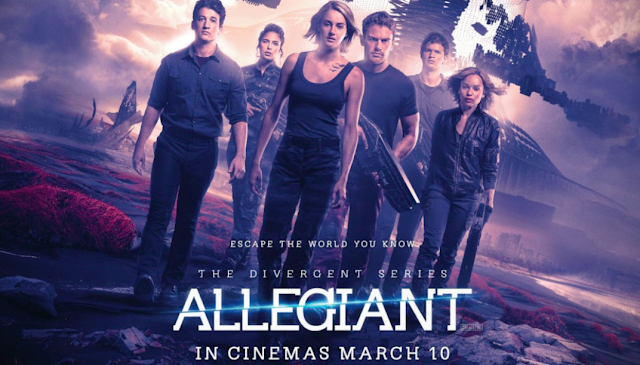 "Welcome to the future. We've been waiting for you." ~ Allegiant

Continuing with my book-to-film series, this week's movie review is on the third film in The Divergent series, Allegiant. I read the novels quite a while ago, a series popular with teens, young adults, and all fans of dystopian novels. I do not recommend this film to anyone not familiar with the previous two films or the books. Please note, my review does contain spoilers for the previous movies to better explain the plot of this film.

The walled-city of Chicago, once a neatly organized, albeit unnatural, society where people are grouped into factions based on their personal strengths, is in disarray.  The divergents have fought back against the leaders of this system, the factionless, comprised mainly of divergents, have now come to power under their leader Evelyn (Naomi Watts), and, yet, peace is still far-reaching. One group, the allegiants, remains loyal to the factions; still others, led by Trice (Shailene Woodley) and Four (Theo James), are determined to find out the truth of what lies beyond the wall.

With former faction leader, Jeanine Matthews (Kate Winslet), now dead, the once factionless outcast, Evelyn, is proving to be a formidable leader. Those that followed Jeanine are on trial, and the walls are once again locked and guarded. However, Trice, having viewed the video left behind by her mother that explains "the experiment", is determined to finish her mother's mission and leads a small group of followers to escape. Once outside, they see vast destruction, an environment destroyed by humanity, mere remnants of radioactivity.

Once outside the confines of the wall, Trice, Four, and the others are taken into custody by the Bureau, led by David (Jeff Daniels), and finally discover why the faction society was created in the first place. Without giving too much away, the controlled society was, in the Bureau's eyes, created to save the human race. Once again, Trice and Four find themselves on opposing sides as questions regarding whom to trust come into play.

Once the characters escape the wall, the film becomes very sci-fi. I started out liking this film, but it was dragged out to make room for Part II (Ascendant). Of course, it raises interesting moral and ethical questions, but I feel it could have easily been one film. I am curious to see how filmmakers handle the second part. Yes, despite not loving this entire series, I will need to see it - to get closure if nothing else.

The Divergent Series: Allegiant is rated PG-13 for intense violence and action, thematic elements, and some partial nudity. I do recommend parents use caution when deciding if this film is suitable for their child.