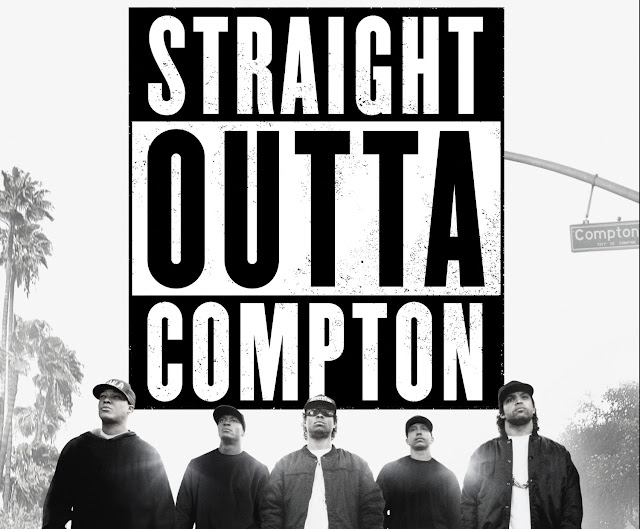 "Our art is a reflection of our reality." ~ Straight Outta Compton

Straight Outta Compton is the 2015 biographical drama that chronicles the rise of the hip hop group N.W.A. from Compton, CA. It received an Academy Award nomination for Best Original Screenplay. The film stars a talented young cast which includes O'Shea Jackson, Jr. who plays his father Ice Cube, Jason Mitchell as Eazy-E and Corey Hawkins as Dr. Dre, along with Paul Giamatti as Jerry Heller the bands manager. While the subject matter alone may have kept me from watching this film (I do NOT like rap music!), I do love a good story and Straight Outta Compton definitely fits that bill. It also probably helps that I grew up in the time frame of the film and recall several of the incidences referenced in the film including the Rodney King beating and subsequent riots and the surge of the AIDS epidemic.

In 1986, Ice Cube, Eazy-E, and Dr. Dre are living a hard life of gangs, drugs, and crime. The one thing that helps them escape the streets is their music. Along with DJ Yella (Neil Brown, Jr.) and MC Ren (Aldis Hodge), the gangsta rap group N.W.A. is born. When they are discovered by Heller, their career takes off along with the popularity of rap and the entire hip hop culture. To this day, N.W.A. is considered one of the most influential bands for this genre. With their success comes a lavish lifestyle, but one thing they can't escape is the street culture in which they grew up.

In addition to the story, I enjoyed the performances of the entire cast. And, while I personally disapprove of most rap music because of the offensive lyrics and glamorization of the gang lifestyle, the elements of freedom of speech and censorship presented in the film were on-target. However, so was the fact that public figures have a responsibility to not incite violence. Straight Outta Compton also highlights police brutality and the infamously controversial L.A.P.D., which is not shown in favorable light at all in the film. Historically this film is very interesting.

If you are a big music buff or simply like films that deal with a lot of important issues that still plague our society today, I recommend you see this film. However, this is certainly not a film I would suggest to everyone (and certainly NOT my parents!) In addition to the rap music itself, of which I am not a fan, there are multiple scenes of wild parties including drug use, promiscuity and violence.


Overall, I liked this film and, if I am to be completely honest, I am quite surprised at how much I liked it. The highlights for me as I previously mentioned were the performances and the actual story which I found quite fascinating. Straight Outta Compton is rated R for language throughout, strong sexuality/nudity, violence, and drug use.


Read more of my Nik's Piks: After Hours reviews.