You know a movie is a holiday classic when your 13-year old son says it doesn't feel like Christmas time because you haven't had the annual viewing yet.  Watching the 1990 hit film, Home Alone, has been a family tradition with my children for years. I remember introducing it to them several years back and they STILL love watching it. 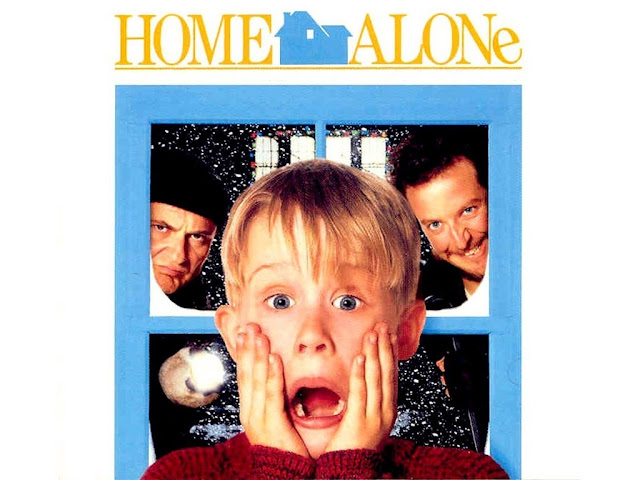 "You'd feel pretty sad if you woke up tomorrow morning and you didn't have a family." ~ Kate McCallister, Home Alone

We all (by now) know the premise of the story. The McCallisters, a family of seven, are headed to Paris for Christmas along with an aunt and uncle and several cousins. Eight year old Kevin is sent to sleep on the third floor after acting up.  When the power goes out, the alarm clock fails to wake the family and when they are finally woken up they need to scramble out the door and rush to catch their flight. Among all the confusion, the headcount is messed up and Kevin (Macaulay Culkin) is left asleep on the third floor. Not until the plane is en route to Paris does the mother, Kate, played by the very funny Catherine O'Hara, realize Kevin was left home alone.

What ensues is one mother's comical, yet sentimental, mission to get back to her son before Christmas. This brings me to one of the most heartwarming quotes of the film.

"I have been awake for almost 60 hours. I'm tired and I'm dirty. I have been from Chicago to Paris to Dallas to......where the hell am I? I am trying to get home to my eight-year-old son. And now that I'm this close, you're telling me it's hopeless?  This is Christmas. The Season of perpetual hope. And I don't care if I have to get on your runway and hitchhike. If it costs me everything I own, if I have to sell my soul to the devil himself, I am going to get home to my son." ~ Kate McCallister, Home Alone

Home Alone is a great family film (BUT see rating explanation below) that touches on the valuable lesson of learning to face your fears. I also really like this film because it shows how tight family bonds are despite all the crazy dynamics and sibling bickering that occur in every family. Probably the most memorable character is the old neighbor played by the late Roberts Blossom.  But the highlight of the film is the epic "battle" at the end of the film between Kevin and the hilarious would-be burglars played by Joe Pesci and Daniel Stern.

The film is rated PG for comic action and mild language. However, while it is categorized as having mild language, there is a lot of it, mainly name-calling. Also, the "comic action" is quite brutal and dangerous. At one point Kevin rides his sled down a flight of stairs out the front door, so you may need to remind children "not to try this at home!" In addition, there are references to female nudity (no actual nudity) and, at one point, Kevin finds and looks through his older brother's Playboy magazine. The biggest shocker to young children may be the local Santa smoking a cigarette.

Like I said, Home Alone continues to be a holiday favorite among my sons. O'Hara, to me, was born to play the role of Kate McCallister and makes me laugh out loud every time. I am sure she is one character all stressed out, but loving mothers, can relate to. The film's music is also wonderful. Overall, if you haven't already added this film to your yearly Christmas tradition, I recommend you do so.