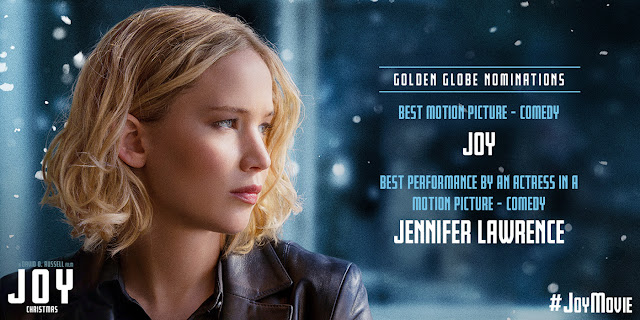 "Sometimes life gets in the way of our dreams, but just because dreams are put on hold, doesn't mean they're lost forever." ~ Joy

With this cast, the 2015 film, Joy, was high on my list of must-sees.  Jennifer Lawrence, who plays inventor and entrepreneur Joy Mangano, delivers yet another stellar performance and Robert De Niro, who plays her father, is flawless as always. In fact, the entire cast was one of the best ensembles in recent years. However, despite numerous industry nominations including a Golden Globe nomination for Best Picture, this film didn't seem to get the recognition from audiences it deserved.

Joy is loosely based on the life of Mangano, a true American success story. Ever since she was a child, Joy was always creating things.  In the late 80s, while struggling to make ends meet, Joy, now a single-mom living in her dysfunctional home along with her grandmother, her divorced parents and even her ex-husband, comes up with a design for a self-wringing mop. The rest of the film focuses on her journey getting the mop patented, manufactured and distributed. That may not sound very exciting on the surface, but this is a story of fighting and staying strong even when if feels like you've hit rock bottom.

Joy finally gets a break when Neil Walker (Bradley Cooper), an executive with QVC - the nation's first televised shopping network that was just starting to take off - gambles on her idea. However, Joy quickly learns what it is going to take to succeed in a man's world.  Lawrence's portrayal of Joy earned her an Oscar nomination for Best Actress in a Leading Role and is truly her best performance since American Hustle and Silver Linings Playbook.

In the spirit of other uplifting stories such as The Pursuit of Happyness, Joy illustrates a remarkable person who refused to give up on her dreams. The script is fantastic and will make you laugh and cry. I thought the middle moved a bit slow, but overall, I thoroughly enjoyed this movie. The film also stars Edgar Ramirez as Joy's ex-husband, Isabella Rossellini, Dascha Polanco, Virginia Madsen, and Diane Ladd who gives a heartfelt performance as Joy's grandmother who also narrates the story. Joy is rated PG-13 for brief strong language. I recommend this film to fans of family drama and inspirational films.