I always love to see the reactions of people, most people anyway, when I say I'm a Howard Stern fan. Their looks are often ones that indicate I shouldn't admit to it. That always makes me laugh.  In fact, if you don't like Howard Stern, go ahead and stop reading now. My review of his 1995 memoir, Miss America, isn't going to change your mind.  Or will it? 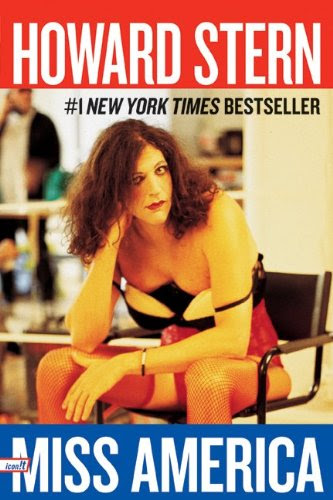 I grew up in N.Y. and feel like I always knew who Howard Stern was. But, I certainly wasn't supposed to listen to him, right?  He's crude, sexist, and downright offensive.  Isn't that what his critics say?  What his critics won't tell you is that he is probably the best interviewer out there, even better today than in my earlier years of listening to his show.

It wasn't until the release of Private Parts in 1997, the film adaptation of Stern's first book, when I discovered how talented this radio personality really is.   He's been called the ultimate shock-jock, the King of All Media, but whatever you want to call him - he is one brilliant entertainer.  In fact, I'd call him the most successful radio broadcaster of all time.

After watching Private Parts, I started listening to Stern's radio show and was hooked immediately. Of course, that all changed in 2006 when Stern took his show and moved to satellite radio. Can't say I blame him, but that was the end of my Stern days.  Thank you very much, FCC.

Until that is, this year when I traded in my car for one with satellite radio. After three months of a trial, I was once again hooked and, needless to say, subscribed to the radio service after my trial was up. I can go into a million reasons why I love his show and even tell you which segments I like and which I get bored with, but let's get back to the point of this post - a review of his second autobiography, Miss America.

"...when you truly innovate, the public and critics often react to an irreverent new show negatively." ~Howard Stern, Miss America

First, let me say that this memoir is not for everyone.  Miss America will most likely shock, if not offend, most readers at least once (maybe even once per page), so, yes, you have to be open-minded. BUT THAT'S THE BEAUTY OF IT. Stern is a master at poking-fun at serious issues in such a politically incorrect manner, that listeners (or readers in this case) have to laugh. His entire persona laughs at the hypocrisy of society - particularly calling out people who take themselves too seriously. Plus, half the time he's making fun of himself.

"With the OCD, I was just substituting another box that kept me from the dangers of the outside world." ~ Howard Stern, Miss America

Miss America covers the highlights of his career and his relationships with on-air personalities listeners have all grown to love (or hate) over the years.  He recounts classic on-air shenanigans and the time he dabbled in NY politics. He vents his frustration with the radio industry and even says it was making him crazy and that he should get out of it. Well, twenty years later, the King of All Media still, thankfully, lives on.

I recommend Miss America to all Howard Stern fans and readers (18 and older) who enjoy autobiographies of interesting public figures.  It is an honest and humorous look at one of the most brilliant masterminds in radio history.  The writing is pure Stern. You will feel like you are in a room with him reminiscing over a cup of coffee.  Is it outrageous? Yes. Does it get raunchy? Absolutely. But, like with everything Stern puts his name on, it is brilliantly funny, entertaining and just might make non-fans take a second look at the man.

Read more of my book reviews.