The Lorax made a big splash when it hit theaters in 2012, but I actually didn't sit down and watch it until this week's family movie night.  Based on the children's book by Dr. Seuss, The Lorax is a compelling story of environmental conservation.  The book, which was first published in 1971, focuses on corporate greed and the subsequent consequences on our planet. It amazes me that Dr. Seuss had the foresight decades ago to see where we were headed - yet we've done little to prevent it.

"A tree falls the way it leans. Be careful which way you lean." ~ The Lorax

The setting is Thneedville, a walled, environmentally artificial city that hasn't seen a real tree in years. This, of course, is not a problem for the O'Hare Air Corporation that is making a fortune selling bottled-air.  Ah, yes! You see, without trees the air quality is down and the citizens of Thneedville need to purchase air.  When a young boy's crush on a girl drives him to discover the truth about what happened to all the trees, Mr. O'Hare will stop at nothing to prevent the return of real trees wanting to protect his billion dollar industry.

The story centers around a young boy, Ted (Zac Efron), who wants nothing more than to impress Audrey (Taylor Swift).  Audrey dreams of someday seeing a REAL tree.  But is that even possible anymore?  Ted's grandmother, played by the marvelous Betty White, is one of the few citizens of Thneedville that remembers when trees actually existed. She instructs Ted to go outside the city walls and find Once-ler (Ed Helms), the man who can tell him the truth behind what happened to all the trees.

Reluctantly, Once-ler tells Ted the story of how he was blinded by greed. Years earlier he created a versatile, albeit gimmicky, contraption called a thneed.  However, to manufacture this innovation, Once-ler needed trees.  As soon as the first tree is cut down, the mystical guardian of the trees, The Lorax, played by the lovable Danny Devito, is summoned to try and put an end to this devastation.

"Everyone here needs the trees, and you're chopping them down!" ~ The Lorax

Unfortunately, the thneed soon becames a big hit and production picks up.  Before he could be stopped, Once-ler cut down all the trees due to short-sighted corporate greed. (Anyone seeing any real-life parallels?) Now, with the trees all gone, the wildlife displaced, and increased smog, the disheartened Lorax departs leaving only one word behind.... "UNLESS."  Will Ted be the one to turn the world around? 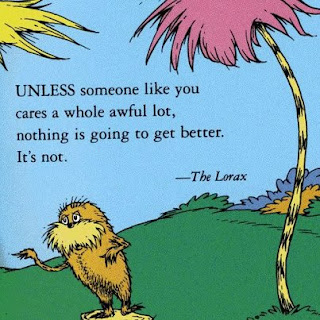 The Lorax is a children's version of a dystopia society. I have to admit, it was painful to watch in an environmentally conscious way. My eyes welled up when the last tree was cut down and my heart broke.  This is the perfect film to inspire even the youngest environmentalists!

The Lorax contains all the adorableness you'd expect from a Dr. Seuss story.  It is colorful and filled with delightful critters.  There are some catchy songs that could potentially drive parents nuts, but deal with them! Your children will love them.  The film is rated PG for brief language (do they even make G-rated films anymore?) and makes the perfect family movie night pick. I couldn't leave without sharing at least one song!

Let It Grow / Celebrate the World