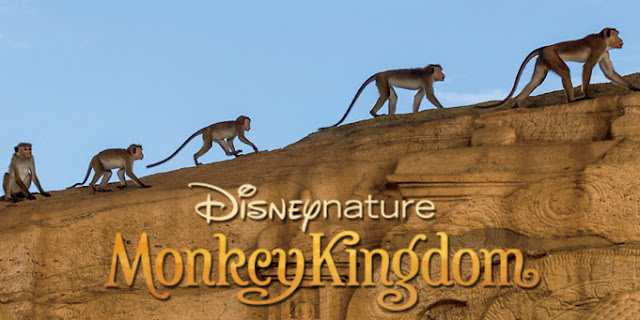 Disneynature's eighth documentary film, Monkey Kingdom, is geared toward families but suitable for anyone.  Narrated by the talented and very funny Tina Fey, Monkey Kingdom takes you into a colony of macaque monkeys in Sri Lanka. The story line focuses on one particular member, Maya, while demonstrating the very complex hierarchy and struggle for survival that exists in this animal kingdom.

The colony of Castle Rock is ruled by King Raja, the alpha male, and three sisters who, combined with their offspring, make up the group's royalty. (These three sisters make all other "Disney villains" seem tame in comparison.) The position one is born into determines everything including access to food, shelter, and how you are treated. Maya, a low-born member, spends her days just trying to survive. Her battle becomes more complicated when a new suitor enters the picture and she gives birth to her son, Kip. Leave it to Disneynature writers to turn a mating ritual into a love story. It was all extremely endearing.

The film captures the cheeky antics of the monkeys along with their interactions with other jungle inhabitants such as a shy mongoose, sloth bears and others. However, it also captures some tense moments with predators and I will remind parents that nature is nature and there are a couple of casualties that can be disturbing to young viewers. (NOTE: These scenes, while tense, are not graphic. Television nature shows are far bloodier.)  There were a few instances that left my mouth agape, both in delight and in horror.

Due to circumstances occurring naturally in their environment, there is an eventual shift in power turning this story into a true example of heroism. The bond between Maya and Kip is so beautiful I doubt viewers will ever look at animal relationships the same way again. The trials and tribulations Maya goes through to save her son are heartwarming to say the least.  In general, the facial expressions of these primates captured on film are mesmerizing and will bring you laughs and tears.

The film depicts the most amazing scenery and the cinematography was a definite highlight of this documentary. Kudos to the cameramen and writers for making this movie both educational and entertaining. The film is rated G and while very young viewers might lose interest outside the comedy provided by the playful monkeys, older children will delight in the actual story line. Having taken my sons to see Disneynature's first film, Earth, in theaters back in 2007, my son now admits that he was too young to appreciate it. Disneynature's ninth film, Born in China, will be released as always on April 22 - Earth Day.

Read my other Family Movie Reviews.