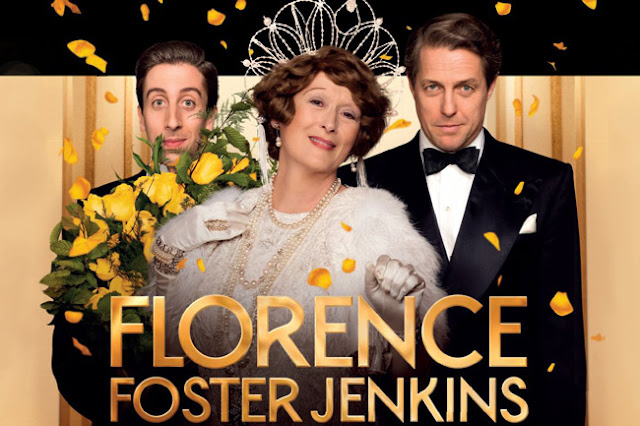 It has been several weeks since I have published a movie review. However, I am back this week with an inspiring film, Florence Foster Jenkins. This 2016 film is based on the real life of Florence Foster Jenkins, an American socialite turn amateur soprano, who took the music world by storm in the first half of the 20th century, but not for reasons you would think. While her status gave her the opportunity to follow her dream of becoming an opera singer, it was her heart that made her succeed.

Meryl Streep stars as the eccentric musician who, years earlier, gave up her family's fortune to teach piano and follow her passion for music. The film also stars Hugh Grant as her husband, St. Clair, and Simon Helberg (Big Bang Theory) as Cosme McMoon, her pianist. All three actors, including the film itself, received numerous industry award nominations including an Oscar nomination for Streep for Best Actress.

"We have to help her, because without loyalty, there's nothing." ~ Florence Foster Jenkins

The love story between St. Clair and Florence is very tender, but certainly unconventional. Their relationship is one of utmost loyalty and shows that love can take many forms. Helberg's portrayal of McMoon offers some comic relief; he was my favorite character.  There are a couple of moments in the film that will tear your heart out, and at least one other that will give you chills and make your heart smile.

However, despite all the accolades, this film is not for everyone. It is a a true period piece with a story line that moves at a quiet pace, and, to be honest, her voice may drive some viewers mad. The film is rated PG-13 for brief suggestive material. Florence Foster Jenkins is truly a lesson in loving life and following your passions, and, although I didn't personally love the film, it was very inspirational.