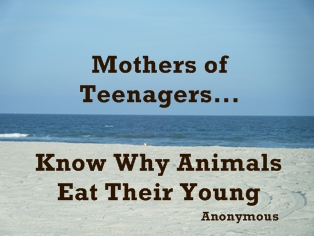 I love when my long-time friend and I get together for lunch and discuss all the latest antics our 12-year-old boys are up to.  It's never a pleasant conversation and a far cry from the times years ago when we would discuss our sweet, little boys and their new accomplishments. Now it's all about, "Can you believe he said THAT?"

This afternoon was one of those incidents when being a mother to a hormonal tween was enough to make me want to jump off a cliff or, at the very least, eat a gallon of ice cream.

When I picked my sons up at school, I reminded my older one that he has his annual eye exam today. Immediately he started with the complaining. "Why tonight?  I just want to go home.  I'm not going!"

"Ummm, ah, yes, you ARE going," I muttered trying to keep my composure.

The entire way there AND the entire time in the waiting room - bitch bitch bitch!  OMG!  What a change from previous years when he couldn't wait to get new glasses.

When we were called into the first examining room, I caught him rolling his eyes at the doctor's new assistant. Yep, there was my baby giving this poor woman complete and utter attitude.  I was mortified. As we shifted from one room into another, I whispered to her a sincere apology for my son's mood.

After the exam comes the fun part, right?  Picking out new frames!  He decided, since his prescription hadn't changed, he didn't want new glasses.  "Insurance pays for them, you are getting a spare pair," I insisted trying desperately to remain calm.   I also reminded him that his current pair broke three times over the summer and that a spare pair would be useful to have.

Nope, still attitude.  Still refused to try frames on.  "I'm not going to wear them so why bother?" he declared. Unfortunately, the frames he currently has weren't available any longer.  Otherwise, I would have picked those again and called it a day.

With what I'm sure was embarrassment on my face and in my eyes, I looked at the assistant, picked a pair off the wall and said, "We'll take these."  I then looked at my son and asked one final time, "Would you like to try on this pair I chose for you?"  He grabbed them, put them on for a split second and said, "These are fine."

Perfect, at least we're making a decision.  Let me just mention that the receptionist, who I have known for years, was watching this entire scene unfold from behind the counter smiling and giving me a "they all go through it" kind of look. I think she may have actually whispered this to me, but I was too much of a mess to really focus.

While ringing us up, the assistant asked if my son wanted transitions again, like his current pair.  I said, "No, I'm not paying for transitions (not covered by insurance) for a pair of glasses that are going to sit in his drawer." My son agreed, reiterating, "Yep, not going to wear them." Great, another decision made.

As we were walking out the door, the receptionist called me aside and said, "Nikki, you know you're a great mom!"  Really? Because I didn't feel like it at the moment.  In fact, I felt like crying!

While I drove home I thought of all the consequences he should have for this behavior.  He, on the other hand, sat in silence contemplating (trust me, I know my son) whether or not he just cut off his nose to spite his own face.  Plus, he's been a complete angel since we've gotten home, which is further proof that kids this age are just crazy!

I've decided no consequences are in order.  When his current pair of glasses mysteriously end up under my car tires, he'll have no choice but to wear the ones I picked out.  That will be justice enough!