My son's soccer league decided to cut the last three regular season games and start the playoffs yesterday. My son's team was good enough to squeak into the top four seeds but that meant that they had to play the number one team in the first round, a team where the average player has about 4 inches in height and 35 or more pounds on each of the players on my son's team. But that's okay.  My son's team proved time and time again this season that their skill level was top notch despite being the smallest team in stature. During the regular season they tied once, and lost 3-2 the second time they met this team. So we knew they had a shot.

No crisp fall days for us on the fields.  With a  start time of 12:30, it was brutal out there, and I am just speaking as a spectator!  As usual my son played goal first and fourth quarter. We managed to hold them off 0-0 after one.  In the second quarter, one of amazon players nailed one and it went in- nothing our goalie could do about that one!  Then my son scored to tie the game!  In the third quarter they sneaked another past our goalie and we spent the remainder of the game trying to even the score. We were unsuccessful and lost 2-1.

Luckily it is a double elimination bracket so we get to do this all over again tomorrow night. But none of this is the point of my story. 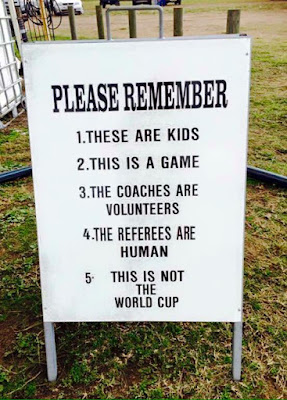 Our opponents were not only bigger - they were meaner. And had parents on the sidelines that were actually encouraging their sons to play rough.  There is one player in particular that is just nasty (we'll call him #7)  and I've been hearing him yell at his OWN teammates all season, "UGH, I set you up perfectly and you miss the shot, unbelievable!" - crap like that.  I really don't know how his coach tolerates it. Who knows? Maybe he perpetuates it. It was clear his parents, who were sitting next to me, sure did!

In the first quarter, #7 grabbed our coach's son by the jersey and threw him off the ball he was dribbling. So now, not only with 35 extra pounds and 4 inches on our player, he also feels the need to manhandle our guys.  I couldn't believe the referee didn't call this blatant yellow card that I actually screamed some statement of disbelief - did I mention I was surrounded on both sides by parents from the other team. I didn't care. Well, the game finished and throughout I continued to be amazed at this one kid's bad sportsmanship.

After the game, I went to a shadier spot to wait for my son. When he met up with me, he had quite the story to tell. Apparently I wasn't the only one appalled at this player's, #7, attitude and behavior. After the game my son's coach had a "little talk" (well, not so little from what I heard) with the referee who also happens to be the league's director explaining that this child not only should have gotten a yellow card for the incident I witnessed, but had, apparently, been verbally threatening the players on my son's team. From what I can gather, this player must have a reputation for such behavior.  The referee agreed to suspend him for his next playoff game. I'm telling you this older league, although recreational, is intense!

I only wish I could have witnessed the referee telling #7's parents - who I sat near during the game and were super obnoxious. At one point after his mother called "out, black ball" I said, "Guess parents are linesmen now?"  As another season of soccer comes to an end this week, I am reminded of how truly blessed my son has been in his three seasons of rec soccer. He has had amazingly supportive and encouraging coaches and just the best group of boys as teammates each time. I have seen how he has matured as a player and has grown to love the sport even more. Isn't that what it's all about?

Don't Fix It, Deal With It

A Close-Call for Epic Mom Failure