If you follow my blog you'll understand why I felt the need to respond to +Joanne Smith 's recent blog post: A Woman's Worth. In her post (which I encourage you to check out) Ms. Smith touches on how the Internet has escalated the notion that a woman's worth is based on her outward appearance. Women and, sadly, girls of all ages are obsessed with sharing selfies and are basing their worth on how many likes the photo gets. Let me share something with those women right now: 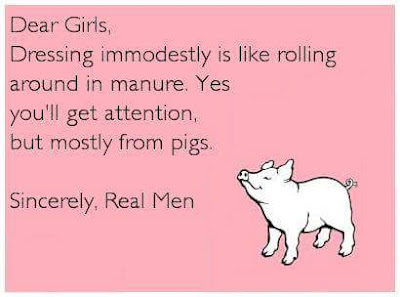 It is such a shame that women who practice this public display of being attention whores don't comprehend that they are demoralizing all women and making it that much harder for ANY of us to be taken serious by men and society as a whole. So it is easy for me to be angry with them, but I am also embarrassed for them.

Yet men eat that crap up and then feel like they can treat all women as sex objects. I have an acquaintance on Facebook. She is in her fifties. She is what society would consider a knockout. Tall, slender, large-breasted, and blonde, but I'll remind you - IN. HER. FIFTIES. She actually hires professional photographers to take pictures of her in lingerie, the bath tub, leather get-ups etc. and then posts them on her wall. It is actually quite comical to  then sit back and watch how all the dogs comment on how hot she makes them. Ewwwww!

I mean really?? I expect this vain, superficial behavior from twenty-year-old women, not 50-somethings. I mean there are some attributes of hers I wouldn't mind having, but not at the expense of my intelligence, personality, wit, and humor (and, apparently, modesty - LOL) -not my ass, although it happens to be a fine ass!

Being sexy is one thing I think all people (especially women) strive for. But sexy is not the same thing - it is NOT what +Joanne Smith and I are talking about. Portraying yourself as a sex object is the exact opposite, in fact. True sexiness is subtle and mysterious. Not "don't you like my boobs?"

Ok, I have probably ranted long enough. But just one more thing before I go:

To the men whose virtual drool I have to wipe off my computer screen just from their comments on such posts, you realize that these women you're falling over wouldn't give you the time of day. And the smart, amazing and attractive women that would have otherwise taken notice of you, are instead just laughing at your behavior. Just thought you'd want to know the truth.

This blog post was in response to +Joanne Smith 's post A Woman's Worth - check it out!