Last week I was at my sons' school volunteering and the Edu-Garden teacher decided to take me on an impromptu tour of the school's organically grown garden. In addition to the abundance of vegetable crops the students are in charge of cultivating and harvesting, they also have about a dozen free range hens and a bunch of bunnies. The teacher specifically wanted to show me the nearly fenced area my son and a group of other students recently built for the hens so they can still roam freely without eating (and destroying) all the crops. 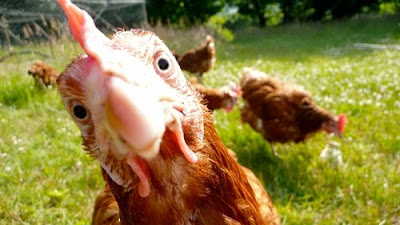 I could not get over the personalities of these hens.  It was still early in the morning and they were still in their night coops. So the minute the teacher and I walked up to them, they immediately all crowded the door and started chirping (Is that what chickens do? Chirp?) Clearly very excited, the hens obviously knew that it was nearing the time for them to be relocated to their open air enclosure and were expressing their restlessness. The teacher told them they had to wait a few more minutes for her first students to arrive.

As she and I stood near them and chatted, I could't believe all the little personalities of these chickens. Not only were they super friendly and beautiful, they were clearly quite familiar with their daily routine. I couldn't help but ask how the students move the chickens from their coops to their field. She said the students either carry them or they follow the students - GET OUT! How cute must that sight be!

When I marveled at the little characters that they were, the teacher admitted that now having worked with them for some time, and seeing their individuality and intelligence, it was getting harder and harder for her to eat chicken. BUT, she said, it is difficult to be vegetarian when the rest of your family isn't.

This is a statement I hear often. While it is very helpful to have your family and friends on board, supporting your decision to go vegetarian or vegan, they don't have to make the change too in order for you to be successful. This decision is very personal and one that needs to be made from within an individual's own heart and mind. Forcing your family to go along with your new lifestyle may not always work or be easy. Much gratitude is owed my mother who has become quite the vegan cook and always goes out of her way to prepare vegan dishes for me when we go over her house.

Unfortunately, my sons are such picky eaters that I am lucky they eat anything. So when people ask if it is a pain to cook multiple meals, I laugh because I have been doing that long before I became vegan. Ironically, they are almost self-proclaimed vegetarians anyway and eat very little meat. Had I had the foresight to raise them vegan then we wouldn't be having this discussion at all. Consider yourself fortunate if you have a family that will easily switch to vegan meals. The hardest part for me isn't necessarily preparing multiple dishes, but handling the meat products themselves, which is becoming increasingly repulsive to me. 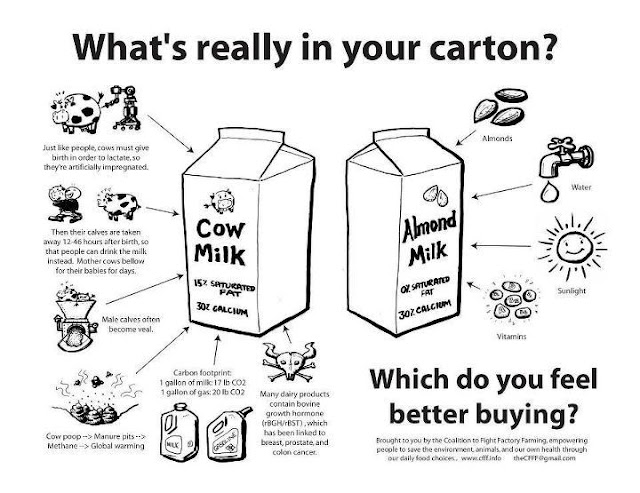 My youngest son has made the switch to chocolate almond milk.

I am fortunate that my sons attend a school that promotes plant-based eating and many of the staff are either vegetarian or vegan. I know the students are picking up on these values and that is having such a positive impact.  One time my older son refused to eat his baked chicken stating, "He didn't feel right eating animals." Now how am I going to argue with that? Unfortunately, I also knew that he was just telling me what I wanted to hear because he didn't feel like eating it for THAT particular meal.  While I didn't make him eat the chicken, I gently reminded him that giving up animal products is a full-time commitment and not based on mood.

But just because your family isn't vegan doesn't mean you can't be.  Most meals can be made vegan with simple substitutions and, if you have children that eat the non-vegan version, they will most likely eat the vegan alternative (mine generally won't eat either!) I make a mean vegan baked ziti and even vegan eggplant "parmigiano" with portobello mushrooms. I even made vegan tacos the other night! If worst comes to worst and your family is as picky as my sons are, you may have to do a little more cooking each night making one vegan dish and one non-vegan dish. Try introducing vegan foods to them gradually. I bet if they are generally good eaters, they will soon discover how delicious being vegan is. I have made some small adjustments to my sons' diets, but not enough - not for a lack of trying.  At this point, all I can do is educate them on why I went vegan - gruesome details and all. Then, perhaps in the future, they will make the connection themselves and decide to pursue veganism. It may take a bit more commitment and work on your part if you rfamily isn't also vegan, but the bottom line is, it can be done!