IMPORTANT INFORMATION For Women, Men Who Love a Woman, or Anyone Who Knows a Woman

I can't exactly have a blog about being a midlife woman without discussing the elephant in the room - menopause! So listen up if you are a woman, love a woman, or know a woman - keep reading! 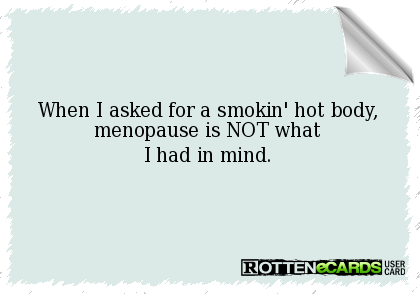 While waiting in line at the coffee shop in late August, my cell phone rang. Looking down I noticed it was my doctor's office so I stepped outside to take the call anticipating how this conversation was going to go. After initial pleasantries were exchanged between the nurse and me, she proceeded to get down to the point of her call. The doctor received my blood tests results confirming that I am, in fact, menopausal.

Last spring I went to see my doctor for some routine tests.  I mentioned that I hadn't had a period since November and I suggested I might be menopausal.  For the last three years (maybe more) I was complaining of an irregular cycle and had asked if I could be starting menopause.  "Possible," she would always say, "but unlikely." Apparently she felt I was a bit too young. Now, with no period at all for six months, she was still doubting that I was in menopause claiming it could be stress or some other medical reason.

So when I returned to her in August, now 9 months since my last menstrual cycle, she questioned me further.  "What other symptoms are you experiencing?" she asked.

I proceeded to tell her I was having the usual hot flashes and night sweats (Which makes living in Florida a living hell. I've secretly considered packing up and moving to Antarctica.) I also have noticed increased acne especially along my jaw line (Did you know breakouts along your jaw line are typically hormone related?). Plus, every 28 days I noticed I was still getting PMS symptoms - bloating, moodiness, irritability, and a RAVENOUS appetite. Ladies, you know what I mean - when you can't stop shoveling the food into your mouth. And, I have to tell you, there isn't enough vegan chocolate in the world to satisfy my sweet tooth during these few days. 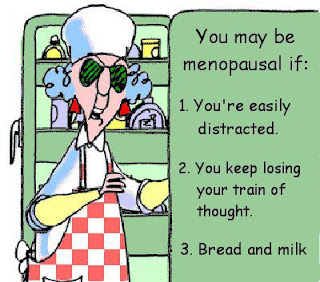 She looked at me, "Well, those sure are the symptoms, but you are still so young."  This is when she declared she wanted to have blood work done, to know for sure that it was menopause and not something else. She needed concrete medical results. Well, okay, now we have them.  What now?

I called my mom and gave her the news - I mean, it is "news" right? She laughed and said, "Yes, dear, I could've told you that."  Was that a dig at my unbalanced mood swings? Ah, who cares. I couldn't deny that if I tried.

I know some women have a difficult time psychologically with the implications of menopause. We are no longer able to bear children, and I understand this can be a painful realization for many. Not to be insensitive, but me, not so much. I am blessed to have two beautiful children but will admit - I was not a happy pregnant woman. I didn't glow in the glory of being pregnant. I was physically uncomfortable, an anxious mess, and had somewhat unpleasant deliveries. So much so, that during the delivery of my second son, I turned to my husband and said, "NEVER again!"  My doctor joked that she wished she had a dime for every time I said, "I can't do this" during my second delivery.

Other women might say they feel a loss of femininity and sexuality.  Personally, I am not experiencing that either. In fact, I am feeling better about myself in that regard than I have in a very long time. So far, fingers crossed, I haven't experienced the weight gain I hear so much about either, but I am being very proactive in that area.  I am sure it also has something to do with my vegan eating as well.

It has now officially been a year since my last cycle and I can't say I miss it - not psychologically and certainly not physically. The other symptoms I've mentioned are starting to subside and / or I am learning how to cope with them better (All hail the newly installed ceiling fan above my bed, for example.)  Exercise, eating healthy, and taking time for myself - all have helped.

I do not need a menstrual cycle to feel like a whole woman. So, will I miss it? Please! That is like asking me if I'll miss a monthly hostile-takeover by an alien of my mind and body. As soon as I am absolutely certain that sucker isn't coming back, I am throwing a party with Champagne. So men, if you have made it this far in the post, kudos to you  - now go hug the women in your life because all I can say is, menopause sucks!