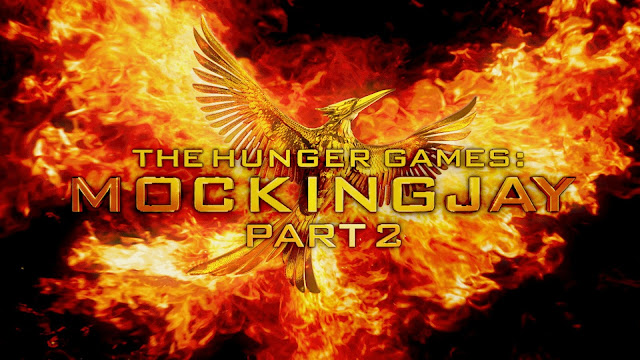 In a special weekend movie review, I give my thoughts on the final film in The Hunger Games series - Mockingjay, Part 2.  And what a finale it was.

Before I go any further, let me mention that this review is strictly for those who have seen the first three films. If you haven't, you will be lost reading this review AND, most definitely, seeing this film.

In my review of Mockingjay Part 1, I admit I actually preferred the films over the novels by Suzanne Collins. And this last film was no exception.  The film picks up right where Part 1 left us. Katniss (Jennifer Lawrence) is recovering from injuries sustained in an attack on her by Peeta (Josh Hutcherson) who has become brainwashed by Panem's President Snow played by Donald Sutherland. Still the voice and face of the rebellion, Katniss is out for revenge and Snow's blood.

District 13's President Coin (Julianne Moore) leads the rebels in an all-out war against the loyalists supporting the Capitol and Snow.  With the two presidents pitted against each other for power, many moral dilemmas are faced - showing war is a terrible business. Manipulation and propaganda are key elements to succeeding, but at what cost?

"The thirst for blood is a difficult urge to satisfy." ~ Mockingjay Part 2

Katniss fights to bring Peeta back from the mental hold of Snow while dealing with the harsh reality that the one she loves is now her enemy. Peeta, on the other hand, must try to make sense of what is real and what isn't.

My son and I liked the film very much.  My only real disappointment came from the fact that the role of Prim Everdeen (Willow Shields) was downplayed in the film. Mockingjay Part 2 is rated PG-13 for intense sequences of violence and action and for some thematic material. I strongly caution parents not to bring those younger than middle school to this film.  Not only is there graphic war violence, there is one scene that is quite terrifying.

Overall, the film was a great ending to what has been an amazing series.

On a final note, this was the final performance for actor Philip Seymour Hoffman (Plutarch) who died of a drug overdose prior to the movie wrapping up. However, his character's words - words Hoffman never got to film - still provided one of the more emotional scenes of the film as Haymitch (Woody Harrelson) reads the words to Katniss instead. While the words themselves were beautiful, I was more touched by the fact that I knew they should have been spoken by Hoffman.