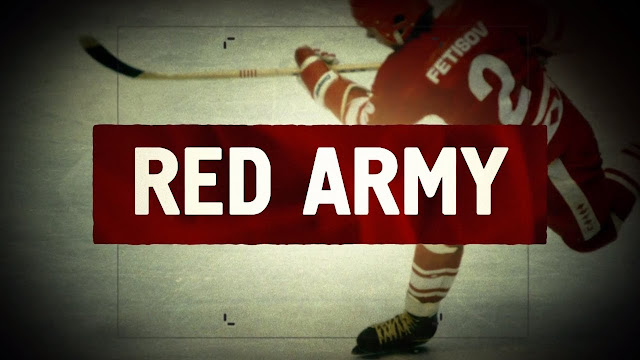 In my continued endeavor to offer movie reviews in a wide variety of genres, I decided to watch the 2014 documentary film Red Army based on the heyday of the Soviet national hockey team during the 1970s through 1991 when the Soviet Union was disassembled bringing an end to the Cold War. In addition to being a must-see for hockey fans, general sports fans and those interested in this political era will also find this film one worth watching.

My interest in seeing the film stemmed from being a long time hockey fan as well as a product of the 1980s. Plus, I was hoping to see some coverage of the Miracle on Ice moment when the USA shocked the Soviets in the 1980 Olympics, one of the greatest upsets in the history of sports. Unfortunately, the coverage of this momentous game was short and if you blink you may miss it.

"The Soviet hockey team represented the peak of what the Soviet Union had achieved and was proof that the Soviet system was the best system." ~ Pozner, Red Army

Red Army is primarily the story of the former Soviet hockey captain, Viacheslav "Slava" Fetisov, from his tryouts as a young boy to his induction into the  Hockey Hall of Fame, and centers around the politics of the game during this time in the Soviet Union. The film highlights the unique (to say the least) coaching style of the national team, how it was run by the Soviet military and its ties to the KGB.

In addition to Fetisov's, there are some other interesting interviews presented in the film including that of journalist Vladimir Pozner. Red Army acts as a history lesson while offering incredible insight into the politics of the time including the defections of numerous Soviet players and what that meant to the NHL. There are some tender moments as well as some shocking stories that really reflect this team's dynasty and the fall of communism.

Red Army is rated PG for thematic material and language. The film features mostly original footage and much of the film is also in subtitles, something to keep in mind. Naturally, I recommend this film to fans of the sport, but it is also a nostalgic film for anyone who lived during this period and those interested in political history. However, it is definitely a niche film and not for everyone.