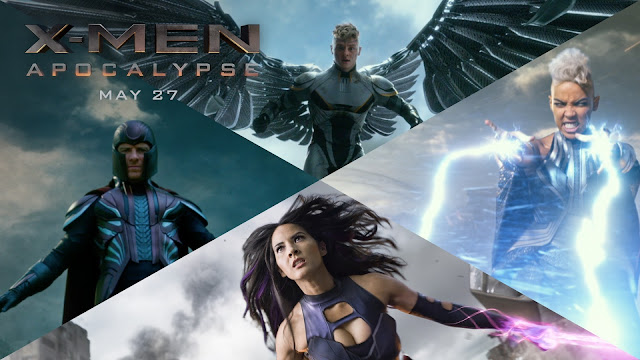 If I thought I was clueless about other Marvel films before heading to theaters to see them, I got a rude awakening when I finally took my son to see the comic giant's latest film, X-Men: Apocalypse. What made this worse is I couldn't even rely on my son to fill me in as he isn't schooled on the franchise either. The most I got out of him was, "They're mutants."  Therefore, sitting down to watch the latest film in the X-Men series, one of the most highly anticipated films of the summer movie season, I was not only curious how appropriate the film is for families and children, but also how will viewers who have limited knowledge of the story and the characters enjoy it.

While I read mostly positive comments about the film, and since it has only been playing in theaters for just under two weeks, I was shocked at how empty the theater was - especially since it was a stormy day in South Florida. So, my initial fear was perhaps this film fizzled out quicker than filmmakers anticipated. I did not, however, let any of that influence my reaction to the film.

First of all, there are nine prior X-Men films that I haven't seen. That's a ton of backstory that I didn't know. Where does this one fit in? Well, I am happy to hear that it doesn't necessarily fit in neatly, so even die-hard fans need to accept that. The film starts off with a sufficient about of background and if viewers will have patience with the storytelling process I think it will make sense to them. However, unlike other Marvel blockbusters like Avengers, Ant-Man, and Fantastic Four, the X-Men films, this one at least, is geared more toward franchise fans - those that really know what the hell is going on.  That doesn't mean that general fans of fantasy / sci-fi won't enjoy it-  I certainly did, but I want to point that difference out.

"Everyone fears that which they do not understand." ~ X-Men: Apocalypse

Right off the bat I could tell this film was going to be much darker than other Marvel films I've enjoyed. Yes, there are the typical intense scenes with mass destruction and violence, but there is something more parents should be aware of. Some scenes are just plain gruesome (Or gory to use my son's word). In fact, he said there were some scenes that made his stomach sick!  He has never said that before and that comment alone gives credence to my parental warning for parents. Just as an example, there are bodies burned alive and lots of beheadings, to give you a couple of examples.  Parents also need to know that the film is nearly two and a half hours long, has a LOT of subtitles, and has some strong language including one F-bomb!

The film takes place in 1983 when mutants are still not being accepted by humans, especially after events that occurred 10 years earlier, which is explained in the film. The "re-birth" of Apocalypse (Oscar Isaac), presumably the first mutant, threatens the planet as he is determined to round up other mutants to help him destroy humankind. It is up to Professor X played (once again) by the very handsome James McAvoy and his mutant students (who will eventually become the X-Men team) to stop him.

The special effects are fantastic making this a great film to see on the big screen! But, what really had me enjoying this film, was the amazing cast of young actors which we will hopefully see more of in future X-Men films. The film also had Michael Fassbender returning as Magneto and Rose Byrne returning as Moira. Hugh Jackman also makes a brief appearance as Wolverine.  Of course, the big name for this edition was Jennifer Lawrence who plays Mystique, but, despite the fact that I love her as an actress, I was not impressed with her performance, especially when compared to the rest of the cast.

X-Men: Apocalypse is rated PG-13 for sequences of violence, action and destruction, brief strong language, and some suggestive images. I do not recommend this film to those under 12 at all. As far as viewers with no prior knowledge of the franchise, whether or not you enjoy this film will greatly depend on whether or not you are a fan of the genre in general.

I'd really like to hear from my readers. If you are a fan, how does this one compare to the prior installments?? If you are like me and never saw one before, but went to see this one, how did you enjoy it?

Check out my Nik's Piks: After Hours reviews for mature audiences.