The Lady in the Van (Nik's Piks: Movie Review) 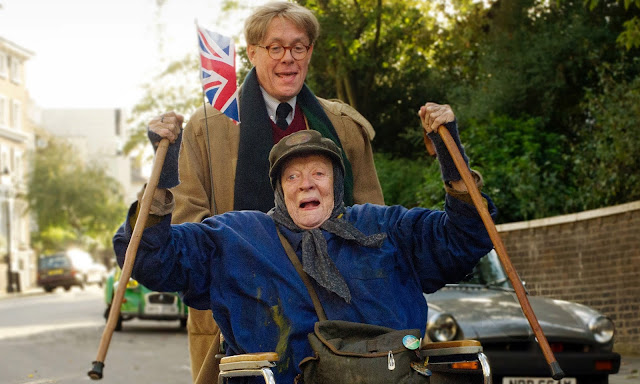 I love discovering films that go virtually unnoticed by the masses. In this case, catching a trailer of The Lady in the Van in the previews of another movie prompted my desire to view it.  The 2015 British film stars one of my favorite actors of all time - British legend, Maggie Smith. Her portrayal of Mary Shepard, a homeless woman living in a van, sparked critic praise worldwide and landed her several industry nominations and the title for Best Actress by the Evening Standard British Film Awards. Smith had previously played this character twice before, once on stage and once in a radio production. The film also stars Alex Jennings who plays writer Alan Bennett. The story is based on true events, and some not-so-true events, as was told in Bennett's memoirs.

"In varying degrees, they tolerate Ms. Shepard, their conscience is absolved by her presence." ~ The Lady in the Van.

In 1973, playwright Alan Bennett moves into a new home in Camden Town, London. Amidst his work and liaisons with several young men, Bennett is captivated by the presence of Mary, the street's homeless woman living out of her van. Neighbors routinely bring the cranky old woman food and gifts, despite their shock at her thanklessness. What develops between Bennett and Shepard is a tender and unlikely friendship. When Shepard's existence is threatened, Bennett invites Shepard to park her van on his driveway for a few weeks until she can figure out where to go.


Fifteen years later, Shepard is still living in the van parked on Bennett's driveway. What fascinated me most about this film, was the back story - how Mary ended up in her predicament. The realization that one incident can truly change a person's life is staggering.

"Absolution is not like a bus pass. It does not run out." ~ The Lady in the Van

This human drama is narrated by Bennett who is reliving the events as best as he can remember while writing her story, filling in gaps as he sees fit. The performances by Smith and Jennings are wonderful making this film worth the watch. However, I was disappointed in the bizarre final scene that seemed out of place in this otherwise serious and poignant look at human behavior and relationships.  It is a touching story with characters that captured my interest, although its execution, at times, was a bit flat. Regardless, I recommend the film to fans of drama and dry, British comedy and those who appreciate the fine art of acting, as Smith is remarkable.

The Lady in the Van is rated PG-13 for one brief unsettling image.