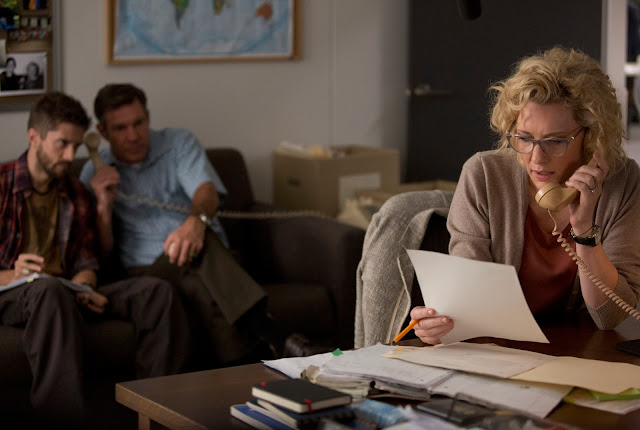 "You stop asking questions, and that's when the American people will lose." ~ Truth

The 2015 film Truth is a political biography based on the events that led to Dan Rather stepping down after twenty-four years as anchor of the CBS Evening News.  The film is rated R for language and a brief nude photo. Truth stars Robert Redford who gives a convincing performance as Rather, and one of my favorite actors, Cate Blanchard, whose portrayal of CBS News producer Mary Mapes is both riveting and passionate. I cannot remember the last time I respected a character so much. The film also stars Dennis Quaid, Topher Grace, Josh Howard, Elizabeth Moss, Bruce Greenwood, and Stacy Keach.

In 2004, just months before the presidential election, Mapes, acting on a seemingly reliable source, and her team of investigative reporters break the story that President George W. Bush not only received preferential treatment that led to his position as a pilot for the Texas Air National Guard, but that he also failed to fulfill his duties and essentially went AWOL. Amidst missing documents and an unusual grant for early dismissal so Bush could attend Harvard, Mapes and her colleagues at CBS' 60 Minutes Wednesday work diligently to validate their evidence - several copies of official memos and Guard documents that discuss Bush's suspect service. Their research leaves them questioning just how high up in the military this favor went.

The story starts to unravel almost immediately upon airing as conservative websites and bloggers hit back hard claiming the documents were forgeries. After all, an election is on the line. Other networks go after Rather personally claiming this was irresponsible reporting. However, as the producer of the segment, it is Mapes who will undergo the most public and professional scrutiny. As sources start to recant their statements, Mapes, Rather and their team are subjected to a grueling investigation.

Political corruption and journalistic integrity are at the forefront of the film's thematic elements.  I enjoyed this drama and found it became better the further into it I got. Truth left me wondering just how deep the corruption went and how far the powerful will go to keep their secrets. It demonstrates how even journalists, whose sole purpose is to seek the truth, can be quieted.