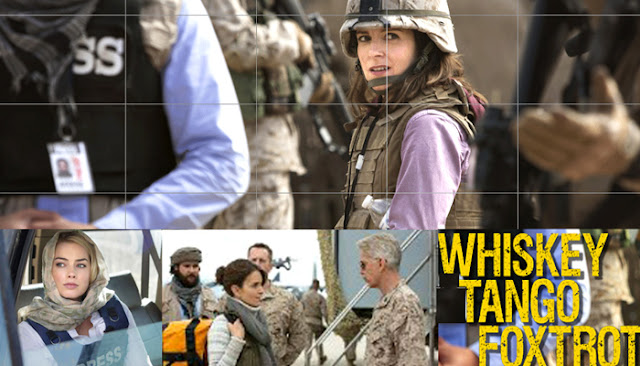 Ever wonder what goes on behind the scenes of an overseas war correspondent's life? Now imagine that journalist is an American woman with no experience in covering such serious subjects. Based on the memoirs of Kim Barker (named changed to Baker in the film), The Taliban Shuffle: Strange Days in Afghanistan and Pakistan, the 2016 film Whiskey Tango Foxtrot is on my short list for favorite film of the year so far! The trailer is a bit deceptive. This film, while witty at times, is NOT a comedy. It shows the Afghan war through the eyes of a general reporter turn war correspondent and the distorted "normal" that becomes her home. If those that take the assignment aren't lost before they arrive, they soon will be.

Asked to cover the war in Afghanistan for three MONTHS, Baker (Tina Fey) heads to Kabul where she will live alongside other journalists in what turns out to be three YEARS.  If you think being a male journalist on the frontlines is difficult, imagine what it is like to be a female journalist especially in the Middle East. While a very strong bond exists between all those there covering the war for us back home, there is also intense competition as they struggle for stories. But when public interest switches from Afghanistan to Iraq, the reporters find themselves having to take more risks to get professional respect and airtime.

"My best friend almost died, and I am jealous of her." ~ Whiskey Tango Foxtrot

One of my favorite elements of the film was the very special friendship that develops between Baker and her translator, Fahim, played by the wonderful Christopher Abbot. I loved his character! I am also a huge Martin Freeman fan. The on-screen chemistry between Fey and Freeman, who plays Baker's love interest and fellow journalist Ian MacKelpie, was playful and sweet and demonstrated a deep, mutual respect between the characters not often seen in films.

The film not only focuses on the Afghan war, it also deals with the struggle for women's rights in the country, sacrifices women make for their careers, and the obligation a journalist has to her story. Yes, the film has its funny moments, but it also is an interesting look at the culture and politics of the area. There are some very tense moments, amazing images and haunting music that sets the tone and really pulls the viewer in. The only complaint I have about the film is that sometimes the sound quality was poor. Coupled with the many different accents from the characters, I sometimes missed lines.

"There's only so much any of us have any control of - good or bad. If you didn't learn that in Afghanistan, you were not paying attention." ~ Whiskey Tango Foxtrot

Loosely along the lines of Eat, Pray, Love with aspects of Lone Survivor, Whiskey Tango Foxtrot is a remarkable story of a woman finding herself in the most unlikely place - the war-torn Middle East where reality and normal become twisted. I am not surprised this film didn't do better in theaters. I am convinced many didn't quite know what to make of it and probably had the misconception it was a "chick-flick." Don't be fooled. This film is a political and war drama with a bit of the Fey flare successfully thrown in. This is a career altering performance for Fey. I loved her in this role, enough that I actually watched this film twice - in the SAME week.