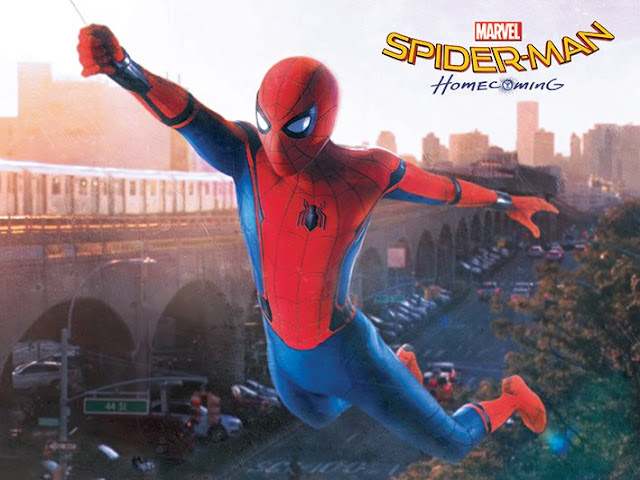 Spider-MAN? Well, maybe not quite yet, but this 15-year-old is getting there. We were first introduced to Tom Holland's Spider-Man (aka Peter Parker) in the 2016 film Captain America: Civil War.  I loved him then, and I love him now in the recently released Spider-Man: Homecoming. Die-hard fans must forgive me. This is not a comparison to any other Spider-Man film or portrayal because I've never seen any others. With that said, I can only say this is yet another Marvel success and a truly enjoyable superhero film.


"If you're nothing without this suit, then you shouldn't have it." ~ Spider-Man: Homecoming

Spider-Man: Homecoming is not an origination film, but is the coming of age story of the youngest Avenger. Having recently been recruited to assist Tony Stark, aka Iron Man, (Robert Downey, Jr.) in the battle against Captain America, Peter now finds himself back in his mundane high school life waiting to be called upon again to help the Avengers. In the meanwhile, he gains experience using his new suit created by Stark Industries and being the friendly, neighborhood Spider-Man by fighting crime in Queens, NY. When Peter finally stumbles upon something big - enter the after-plot of the 2012 film The Avengers - he must prove to Stark, and, more importantly, himself - that he is worthy of the suit and a place on the Avengers team.

Holland is adorable (Yeah, I know, not the first word that comes to most people's minds when they think superhero.) and he, along with his sidekick Ned (Jacob Batalon) will have you laughing the entire film. The film also stars Michael Keaton as our villain, Vulture, Marisa Tomei as Peter's Aunt May, and Zendaya, as Peter's classmate, Michelle.


Spider-Man: Homecoming is rated PG-13 for sci-fi action violence, some language, and brief suggestive comments. What does that mean for parents? There are a ton of loud explosives and action sequences that might be too much for young viewers, but nothing gory, and the worst of the language is "bullshit" and "shitty". In my opinion, as far as PG-13 superhero films go, this reboot of a Marvel classic is one of the more family-friendly films.