Oh bloody hell! For over a decade I have been very deliberate in preparing for hurricane season. All supplies including water and non-perishable foods purchased before June 1 - the official first day of the season. This year, well......nothing. I haven't done a thing to prepare. I have some flashlights and batteries I purchased years ago (wonder if they still work) but besides that, I will officially be doomed in the event my area is hit with any storm that may cause power and phone outages, water restrictions, and flooding. 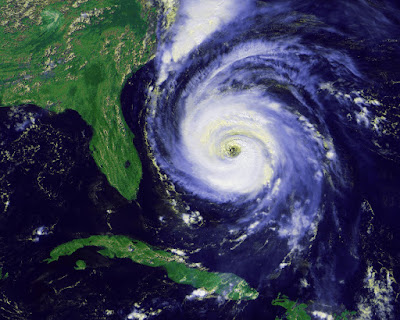 At the time of this writing, Tropical Storm Erika is expected to make landfall right over me on Monday morning. But there is a 240-mile leeway in either direction.  We affectionately refer to this as the "cone of uncertainty." Don't you love meteorologists? There are currently eight - EIGHT - different possible tracks. In other words, they really have no clue at this point where it's going.

I still remember living in Orlando when Hurricane Andrew hit in 1992.  It was coming right for Central Florida. Instead, I woke up to beautiful blue skies while south Miami-Dade County was nearly wiped from the map.  Then there were the hurricane seasons of 2004 AND 2005 where one hurricane after another just rolled into Florida causing at least one evacuation to Georgia by my boys and me.  My youngest was only 6 weeks old. Things quieted down after that, but Floridians are no strangers to the chaos that even the mere mention of a possible storm can cause. A friend of mine just notified me that the local Costco was already experiencing the mania.

So today after dropping my boys off at school, I will head over to the grocery store to pick up necessities.  As always, there will be a frenzy of concern (after all, it has been years since my area got a direct hit - we all know our time may be up!) as shoppers load up carts with bottled water, bread, peanut butter, and chips. This weekend, unless the storm path changes significantly, every household will start cooking everything in their freezer. The lines at the gas pumps will sprawl out into the streets and plywood will fly out of home improvement stores faster than you can say "holy guacamole!"

For those of us in hurricane prone areas, storm preparation and risk is an annual tradition. We know the drill, we choose to live here anyway, and we spend half the year wondering is this the year the big one hits?

So, sure. Go ahead and get all your necessary supplies. But for sanity sake, don't forget to include the following:

1) PET SUPPLIES: food, litter, medications plus wee wee pads for your pooch. You may not be able to walk him for hours. Prepare a "safe space" such as a crate or box for your furry friends as well. 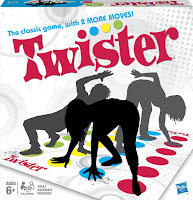 2) KID SUPPLIES: non-electronic entertainment. Yep, families will actually have to talk to each other. Time to dust off those board games.  Twister is a great game because it allows kids to get up and move, releasing the pent up energy they will suffer from due to being cooped up in the house. Also, grab every spare blanket and sheet you can find because nothing is cooler than sleeping in a fort built in your pitch black living room.

3) PARENT SUPPLIES: wine (or booze of your choice), chocolate (sshh, no need to share with the kids, they won't need sugar during this period of house arrest), and, since history shows an increase in births nine months after big storms, make sure you have necessary precautions in that department too.  After the kids are asleep, Twister can come in handy for all you grown-ups as well. Think naked Twister! No? Maybe?

Well, anyway, if you should find yourself in a boarded up house Sunday night waiting for Erika, be smart and be safe and toast a glass of wine to me.