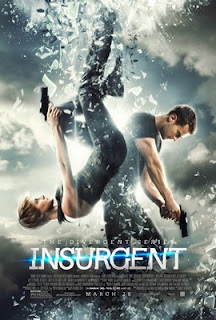 Now that I am writing reviews for parents, I am noticing how wide the span is in PG-13 films. Each one is very different and parents should decide on a case by case basis which of these films their children can watch. Some of them are just a step past PG while others are a mere step away from an R-rating. With that said, here are my thoughts on Insurgent, the second film in the Divergent series, now available on DVD.

I couldn't convince my 7th grader to go see Insurgent with me when it hit theaters in March of 2015. This is despite the fact that he had read the book and enjoyed the film adaptation of Divergent, the first in this young adult series by Veronica Roth.  If you recall from my review of Divergent, I didn't love this book series, however, I thought filmmakers did a good job with the first film installment. The trilogy starts off with a great concept but quickly became tedious and predictable by the third novel.

The series is set in a dystopian society in former Chicago after humans have all but completely destroyed the planet.  In order to keep peace, the founders separate the population into five different factions based on dominant personality traits, such as honesty, intelligence, kindness, etc.

Insurgent picks up right where Divergent leaves off (I do NOT suggest watching it without having seen the first film.) Government leader, Jeanine Matthews (Kate Winslet), has pledged a full war against all divergents (individuals who do not neatly fall into the faction system) blaming them for jeopardizing the peaceful makeup of their society.  This group of insurgents is led by Tris (Shailene Woodley) and Four (Theo James) who fought back and are now fugitives on the run.  Matthews has convinced the other citizens the divergents were the ones responsible for the attack against the Abnegation faction.

While Tris tries to deal with her past actions that cause her nightmares and play a dangerous psychological mind-game, she is consumed with the need for revenge.  Matthews' primary goal is to use divergents to open a secret message left by the society's founders.  This is the same message Tris' parents died trying to protect, putting her on a mission to protect its secrecy.

The Divergent Series is very popular among middle and high-school students. But the films are much more graphic and parents should know what they are getting into before allowing their children under 13 to watch.

Insurgent is rated PG-13 for intense violence and action throughout, some sensuality, thematic elements and brief language.  But what does that mean exactly?

If not for clever editing, this film could have easily been Rated- R for violence. As in the first film, there are numerous hand-to-hand fight scenes, some bloody. There is a ton of gun violence, plus another suicide jump, physical torture and execution style murders. Sure, a lot of the "outcomes" are left to the viewer's imagination, but the implications are there nonetheless. While there isn't any nudity, there is more physical intimacy between Tris and Four. There is also some minor language which will go unnoticed next to all the violence.

I am a sucker for finishing a series once I start it, so as with the books, I will finish watching the movie series. Insurgent was okay, certainly not as good as Divergent. I am hoping filmmakers can finish this trilogy off strong with Allegiant (which, by the way, I understand they are unnecessarily making into TWO films - UGH!)