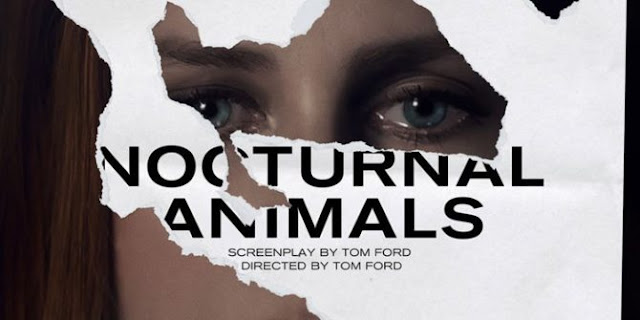 "When you love someone, you have to be careful with it. You might never get it again." ~ Nocturnal Animals

Nocturnal Animals is based on Austin Wright's novel, Tony and Susan, and transformed to the big screen wonderfully by director and writer Tom Ford. I had not heard anything about the movie before deciding to go see it in theaters. However, the fact that it stars Amy Adams and Jake Gyllenhaal was enough for me. And they did not let me down. Both delivered stellar performances, and the script is nothing shy of a heart-pounding, nail-biting experience.

Susan Morrow (Adams) is the owner of an art gallery who left her husband, Edward (Gyllenhaal), an aspiring writer.  Now, nearly twenty years later, a package arrives for her from her estranged ex-husband - his completed novel dedicated to her. Viewers are thrown into the disturbing events of the novel as Susan reads it. The novel, an analogy of the pain she caused Edward years ago, stirs up deep-rooted pain and regrets in her. From here the film continues to show Susan's struggle with her past decisions, as well as flashbacks to her life with Edward.

This is a powerful and dark story of betrayal and revenge - a film that will have you leaving the theater emotionally shaken and even, perhaps, with some questions.  I love psychological thrillers, and this was as intense as they come.

Gyllenhaal once again proves why he is one of the best actors in Hollywood, and Adams just keeps getting better and better. Nocturnal Animals also stars Michael Shannon, Aaron Taylor-Johnson, Karl Glusman, and Laura Linney. The movie is rated R for violence (the worst of it implied), menace, graphic nudity, and language.