Eye in the Sky (Nik's Piks) 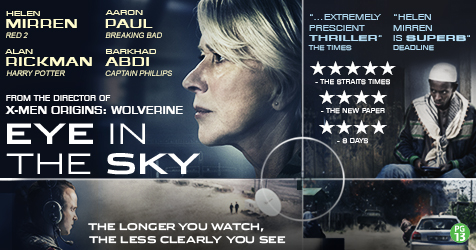 "Never tell a solider that he does not know the cost of war." ~ Eye in the Sky

Eye in the Sky is a 2015 British thriller that will show you an entirely different side to modern day warfare. British Colonel Powell (Helen Mirren) is forced to lead the capture mission in Nairobi of three of the most wanted terrorists in the world after the murder of one of their own. Working remotely with Kenyan and American military personnel, Powell locates the targets and sets off on a capture only mission. But, when new developments indicate the subjects are about to strike again, the mission changes from capture to kill.

As political and military leaders debate over the next steps to take, the situation is complicated further by the introduction of one collateral damage target.  One consideration is whether or not to win the propaganda war at the expense of many lives.

"You are putting the whole mission at risk because of one collateral damage issue?" ~ Eye in the Sky

Eye in the Sky had me mesmerized from the opening scene. The film's look at drone warfare along with the moral, legal, and political aspects Western military leaders are forced to examine everyday was beyond fascinating. I hate to sound so dramatic, but there is really no other way to put my feelings into words. I loved this film!  Seeing how modern day wars are being fought was truly intriguing. The technology was crazy!

Mirren is absolutely wonderful in this film. And, if she isn't enough Eye in the Sky also stars two of my favorites, the late Alan Rickman as Lieutenant General Benson and Aaron Paul as the Air Force drone pilot (the 'eye in the sky') responsible for releasing the weapon. Rickman is superb and Paul delivers a heartfelt performance. The entire cast was amazing and included Barkhad Abdi, Phoebe Fox, Iain Glen, and Richard McCabe along with many others.

Eye in the Sky is rated R for some violent images and language. This is an intelligent war movie and one I highly recommend to everyone! (Not sure I ever said that before!)

Email ThisBlogThis!Share to TwitterShare to FacebookShare to Pinterest
Labels: After Hours, Eye in the Sky, Movie Review, Nik's Piks