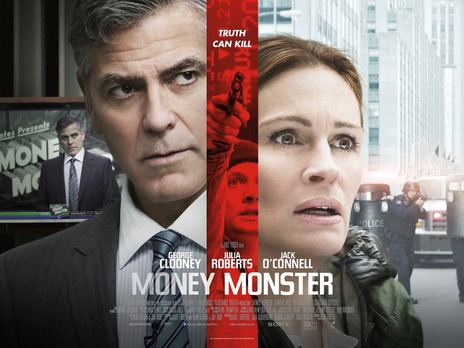 "You see that's the irony about all this. You only came after me because I lost you money. No body was asking questions when everybody was making a profit." ~ Money Monster

Money Monster is a 2016 thriller directed by Jodie Foster and starring George Clooney and Julia Roberts. The underlying theme is ripped from today's headlines. Lee Gates (Clooney) is the host of a cheesy investment show. One day, while on live television, a disgruntled investor, Kyle Budwell played by Jack O'Connell, who lost his life's savings when he followed one of Gates' stock tips, walks on the set and takes Gates hostage. Insisting they keep the live feed or he'll kill Gates, the crew and the world watches in horror.

"There's human fingerprints all over this." ~ Money Monster

The show's director, Patty Fenn (Roberts), tries to handle the negotiations between law enforcement and the intruder while getting answers from the company that somehow lost $800 million dollars in one day despite a foolproof algorithm. In a bizarre twist of fate, the show's host  honestly tries to get answers for this young man who is trying to take on the entire financial industry through his criminal acts.

Despite some good performances and some griping scenes, the film didn't grab me (not at first anyway), and had me wondering if Clooney and Roberts just wanted to make another film together. There is no denying their on-screen chemistry.  I did like the film more by the end as the action became more intense, and as the story took shape and the characters became more developed. If you like dramas that focus on the financial industry, particularly current scams and questionable activity, you will like this film. Money Monster is rated R for language throughout, some sexuality, and brief violence.