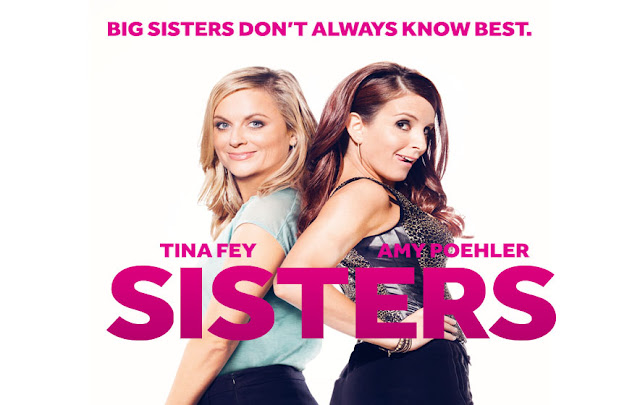 "A house is just a building.  Home is a feeling." ~ Sisters

For this week's movie review, I turn to the 2015 comedy, Sisters, starring the very talented Tina Fey and Amy Poehler. Kate (Fey) and Maura (Poehler) Ellis return to their childhood home, which their parents just sold, to clean out their bedroom. Consumed by memories of their teen years, the two decide to have one more party with their old high school friends. But, the sisters soon learn that "grown-up" parties are lame. So they decide to turn things up and prove to themselves that they can still party like rockstars. While the two come to the realization that their best years aren't necessarily behind them, the sisters also set out on another mission.
Growing up, Kate was the wild, vulgar, and over-the-top party animal. Maura was the reserved, quirky one who always had to keep things within the boundaries of  decency. But, tonight Kate decides Maura needs to let down her guard in an effort to relive the youth she missed out on. Part of that mission is to "get lucky" in her old bedroom.

"Having sex in your childhood home is a right of passage." ~ Sisters

I am not typically a fan of obvious humor, but can tolerate it if the characters are endearing, and that is probably what saved this film for me. Otherwise, the story was weak and the film was simply propelled by comedic one-liners (mostly sexual innuendos) and situational comedy, that honestly got too ridiculous and was too predictable right up to the sappy ending.

Don't get me wrong, Sisters definitely has its funny moments and some great lines, but, overall, it was disappointing. On a positive note, Poehler was adorable and Fey was sexy, and the supporting cast, which included Ike Barinholtz, John Cena, Maya Rudolph, John Leguizamo, James Brolin, Dianne Wiest, Kate McKinnon, and Samantha Bee, was terrific. Sisters is a fun, light film perfect for date-night or girls' night out fun. The film is rated R for crude sexual content, language throughout, and drug use.