My Biggest Parenting Mistake and Is it Too Late to Fix?

Everyday of my life, I ask myself the same critical question?  Is it too late for me to correct my biggest parenting mistake?  I recently saw this video of Stephen Fry reading the book You Have to Fucking Eat by Adam Mansbach about the trials and tribulations of parenting picky eaters and knew I had to journal my own experiences.

I have spoken to other parents who suffer similar frustrations regarding their child's diet, so I know I am not alone, but dang it sure feels like it when I watch other children eating seaweed and sushi packed in their school lunch.  Okay, I get it, I don't eat seaweed and barely touch sushi, so I understand that my children are unlikely to grow up eating it either.

BUT, I do eat salads, eggplant parm, and seafood. So why don't my kids?  For years the pediatrician would ask if my sons are getting 5-8 servings of fruits and vegetables a day.  A week maybe, not a day! He has stopped asking me that question, probably for his own sanity.

When my sons were babies and toddlers they ate most everything: meatballs my mom would bring home from the Italian restaurant she worked at, steamed zucchini in tomato sauce, homemade mashed sweet potatoes.  My God, they ate sandwiches!!! Grilled cheese, peanut butter and jelly, turkey and cheese.  Now? Nothing! Sandwiches are not even open for discussion. My oldest choked (gagged, really) ever so slightly on his sandwich in Kindergarten and that was the end of that.  He is now 12 and only this past summer have I gotten him to try subs - only made fresh at a deli, not by yours truly - and only a few bites.

My younger son loves bread.  Bread lathered with butter.   He also loves cheese.  But heaven forbid I try to put the two ingredients together.

So when did it all change?  I can almost pinpoint the exact moments in time.  We were at my friend's house for lunch.  My oldest was about 3 years old.  My friend prepared a lovely spread for the grown-ups and said she made Kraft Mac-and-Cheese for my son.  Does he like that?  Well, hmmm, don't know, he's never had it before.  I guess we can give it a try.  And there you have it folks, one bad move on my part and the rest is history.  For my younger son I think it was Wendy's nuggets - you know, grandma wanted to take him for a treat.  Crap!  My son will never eat real food again.

However, I'm not saying my sons are all about junk food.  They're really not.  In fact there are still only two fast-food chains they will frequent and only one or two items they will have off the menu. (It stinks that McDonald's won't make pancakes all day.)  I'm very good about limiting fast-food to once or twice a month, not including pizza - we're not including pizza in that category, are we?  If we are, I'm really screwed!!  Soda? Nope, they don't drink it. And my cupboards aren't filled with donuts, cookies, and chips. All junk food is deliberately rationed.  I figure if they're not going to eat their veggies, then they sure as hell aren't getting potato chips and Coke.  My youngest doesn't even particularly like sweets and typically turns down dessert, even ice cream!  He doesn't love ice-cream!!  I didn't know that was even possible.


Now besides their diet not being the most nutritious, this whole picky eating phenomenon causes other day-to-day stresses as well.  For example, do you think I can make A dinner, I mean one meal that everyone is going to eat?  That happens once or twice a week IF I'M LUCKY!   This whole role of short -order cook and making multiple meals is my biggest regret and is the root of all of this mess.  I've noticed over the years little bouts of improvements here and there mixed in with many setbacks. Each son will enter a phase of trying something new and liking it, but, soon, even the once beloved food will become taboo!

I know I have only myself to blame (and a few co-conspirators) that I make more than one dinner. Just the other day a couple of moms berated me for doing such a thing.  "I make one meal and if they don't like it they go to bed hungry," one mom told me.  But maybe their kids don't get "hangry" like mine do.  Sure all hungry kids get cranky, but mine have a full blown hangry episode - it's a real thing - Google it!

As a family we are even limited to restaurants and vacations based on whether or not there will be food available that my sons will eat.  Who goes on a cruise and can't find something they like to eat?  My sons, that's who!  Last summer we walked miles and miles in 100 degree temps in D.C. just to find a darn Wendy's. We never did find one. 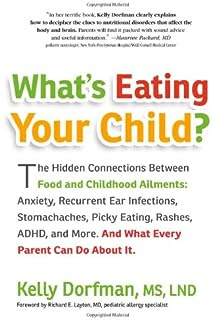 More importantly, there is the whole connection between diet and health and even behavior.  Last year a friend gave me the book What's Eating Your Child? by Kelly Dofman. MS, LND. It provided tons of advice and I still refer back to it from time to time. I recommend this book to all new parents who are trying to avoid health and behavior issues related to food commonly found in children today.  The sooner you start understanding the connection between food and your children's health and behavior the better. Unfortunately, for me it was  a day late and a dollar short.  Of all the parenting books I read when my sons were newborns, I wish I had read this one!

Hindsight is 20/20 and all I can say to new parents is NEVER set a precedent of making alternate meals for your children, avoid the bad stuff for as long as possible, and know the relationship between food and your child's development and behavior.  If I had it all to do over again, my children would eat seaweed and salmon, carrots with orange glaze sauce, and breaded brussel sprouts.  The only version of mac-and-cheese that would cross their lips would be the homemade kind and chicken nuggets would be cut and prepared fresh by me.  But, is it too late?  Is it something I just have to hope they outgrow? Without reminding me that I've completely failed as a parent, please comment below if you have any suggestions that will help!