Just over three months into my blog and I figured it was time for a follow-up.  First, this past Tuesday marked the Thanksgiving feast at my sons' school - the one my older son begged me not to volunteer at in Ouch! When Your Child No Longer Wants You Around.  Well, instead of hosting the grades separately like last year, the school held one campus-wide luncheon.  This meant only one thing - I was going to see my son whether he liked it or not.  My son wanted to stay home, but when I absolutely refused such a request, he laid down the ground rules.

1. I could not acknowledge him at all, no hello, nothing! (Got it, agreed!)
2. I could not say hello to any of his friends.  (I vetoed this in part explaining that I would only say hello to them as I would any other students, no major scenes - agreed!)
3. And, finally, I could not under any circumstances enter his classroom. (Fine!)

So, while I was willing to give my tween some space at school, a couple of his teachers and classmates were not!  Two of his teachers, who knew us both well, had different plans.  In the middle of the luncheon, thankfully held on a noisy outside basketball court, both of them at individual times yelled from the serving line to the seats where my son was sitting.  "Hey, Mike, your mom is here!" "Mike, did you know your mom was here?"   His male friends had apparently been briefed of the rules and shyly bowed their heads when they came through the buffet line.  However, his female friends would have none of that.  While my son slumped over in his seat with embarrassment, several giggly girls came up to me and introduced themselves.

Overall, the event went very well. My son got over my presence, even gave a quick "hi" at one point, probably because so many other parents were there and many even ate with their children. I refrained from such a thing.  Although, he has already requested I not attend next year.  Jury is out on that one.

Now what did my sons eat at this school feast, you ask? You may recall my gripes about my picky eaters in My Biggest Parenting Mistake and Is It Too Late to Fix?  So, when we are faced with events such as this, I have to cringe at the fact that my sons may be living off of bread that day.  My youngest, who came through the line first with the rest of the fifth graders, took some turkey, corn, a roll and one cookie.  He had come prepared, however.  I had packed him some peanut butter crackers and goldfish just in case. My oldest took only the mac-and-cheese and desserts.....lots and lots of desserts.

When it came time for Thanksgiving dinner at my house, my youngest ate some turkey and five or more (I lost count) pumpkin muffins.  My oldest decided to boycott Thanksgiving dinner altogether because "it is cruel to animals."  Now, this was actually music to my ears.  As someone who is making strides toward vegetarianism herself, I can applaud such a stance.  HOWEVER, I do not believe this is the real motive behind his boycott. Why? Because all the other dishes were vegetarian  - he just doesn't like any of them. Early on in the day, my husband declared, "Okay, don't eat the food, but we're not making you anything else." He settled for one pumpkin muffin and a bowl of cereal just before bedtime. 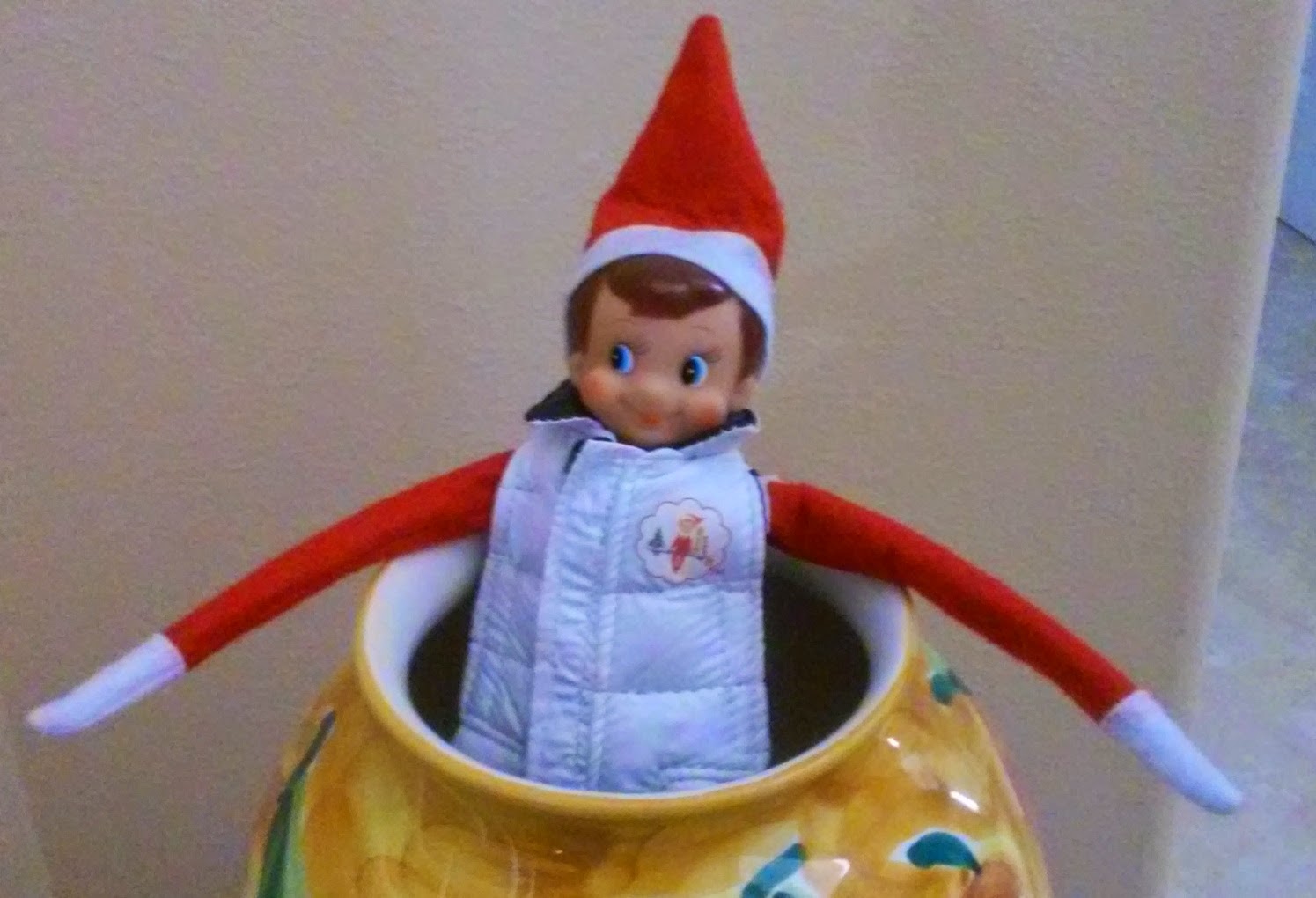 This morning the Christmas magic, or lies depending on your viewpoint, continued at our house, at least for another year. Last night we had the annual arrival of our Elf on a Shelf named Noel. Sporting his new sleeveless winter parka my son discovered him this morning and has been talking to him ever since, catching him up on all the happenings of the previous months.  It's too adorable for words and I wish I had a hidden video camera set up to capture the moment.  And while I mourned the inevitable end of believing in Santa last week in Why Santa Made Me Cry Yesterday, seeing how giddy with excitement he was this morning at the elf's timely arrival, made my heart melt.   I think more than Santa, my youngest will miss Noel.

So, there you have it, a little bit of catch-up for you.  I hope my U.S. readers had a great Thanksgiving and wish all my readers a wonderful holiday season to come.