I finally sat down a few weeks ago to watch Mr. Holmes. I took a ton of notes which means one thing - I really REALLY liked this film. Based on Mitch Cullin's novel, A Slight Trick of the Mind, this 2015 film is a beautiful story of a retired Sherlock Holmes facing his most difficult situation yet - his failing memory. 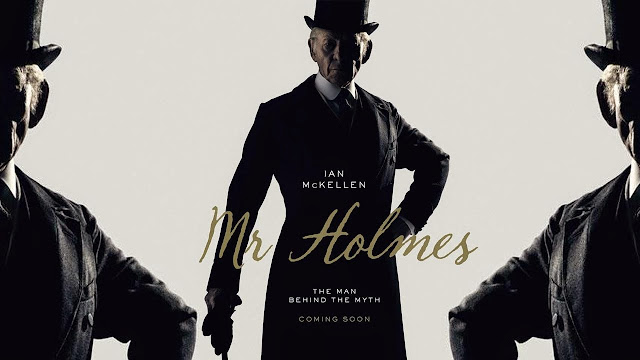 "Well I can't say that I've ever mourned the dead bees....I concentrate on circumstances, how did it die, who is responsible." ~ Mr. Holmes

Set in 1947 Sussex, England, Holmes, played by the masterful Ian McKellen, is now 93 and long retired. However, he is haunted by the one case that led to his retirement.  Annoyed by Dr. Watson's erroneous account of the case in his writings, Holmes wishes to set the record straight.  There is only one problem.  He is now suffering from senility and cannot recall the facts. But why? Why has this case tormented him for 35 years?

The film is a series of flashbacks, both to the events of his final case and to the current day trip he took to Japan to acquire prickly ash - a plant that is supposed to help with his failing memory. A trip that will bring more than what first meets the eye.

While I enjoyed both of these aspects of the film, my favorite part was that of Holmes' bond with his housekeeper's son, Roger, played by the very talented young actor, Milo Parker. Holmes becomes a grandfather figure to the fatherless boy who enjoys reading all of Watson's embellished accounts of the detective's famous cases. Through this caring relationship, Holmes begins to recall the details of this mysterious case that he has conveniently hidden in the depths of his memory.

In the end, a man who is known for, above all else, being logical undergoes a remarkable and heartwarming transformation.  Mr. Holmes is a story of one man's pain and guilt and all the useless feelings he has suppressed for years. Holmes who has never had a use for emotionally charged fiction, learns to feel, learns to mourn, and learns to forgive himself.

"Her death made me see that the human nature is a mystery that logic alone could not illuminate." ~ Mr. Holmes

McKellen delivers another remarkable performance and is joined by the brilliant Laura Linney who plays Mrs. Munro, his housekeeper and Roger's mother.  But it was Parker who won my heart. Mr. Holmes is rated PG and is suitable for older children. However, even my eleven year old son, who is a fan of the current BBC series Sherlock, wasn't completely won over by this film.  I would say keep this flick as a date-night selection despite the family-friendly rating.

**This review was originally published on +The Whacko Blogs on December 18, 2015**