Listen, I am not going to beat around the bush. There is one reason and one reason alone I decided to watch the 2014 film, The Judge - ROBERT. DOWNEY. JR.  (Hey, at least I'm honest.) 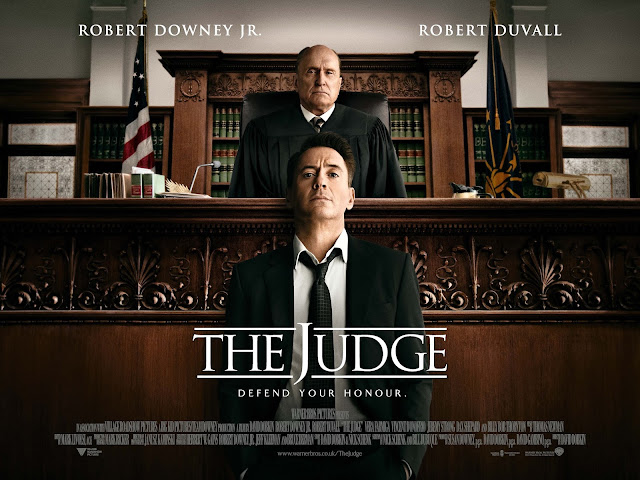 But with that said, I can say I did enjoy this film for a number of other reasons. The script was good and Downey, along with Robert Duvall, deliver very good performances. It is a touching story about the estranged relationship between a father and son.  While not a great film by any means, and a bit too long (more of it should have ended up on the editing floor), I'll go ahead and recommend this one to those who like family / courtroom dramas.

"....sometimes you have to forgive in order to be forgiven." ~ The Judge

Hank Palmer (Downey) is a big shot Chicago defense attorney. When the death of his mother brings him back to his small hometown in Indiana, he must face his domineering father (Duvall) who has also been the town judge for 42 years. Their reunion is strained to say the least.

Just as Hank attempts a quick exit back to Chicago, his father is arrested under suspicion of murder. As a man who always ran away from problems, Hank must make the difficult decision to stay and defend his father.  In the biggest case of his career, he has to make peace with the past while defending the man who made him who he is. In addition, exposing the truth on the stand will mean jeopardizing his father's legacy and possibly destroying their relationship forever.

The Judge is rated R for language including some sexual references.  The film also stars Billy Bob Thornton, Vincent D'Onofrio, and Vera Farmiga.