"There is a sunrise and a sunset everyday and you can choose to be there for it, you can put yourself in the way of beauty." ~Bobbi, Wild

I finally had the chance to sit down and watch the film Wild based on the memoir by Cheryl Strayed. The film, starring Reese Witherspoon, tells the story of Strayed's life-changing solo trek of the Pacific Crest Trail in 1995, an over 1,000 mile hike from Mexico to Canada. With a backpack of supplies and her own inexperienced wit to take with her, she heads out on a journey that will be the ultimate test of her physical and emotional strength. And, when it's over, she'll have to start living again, and that's a daunting reality. 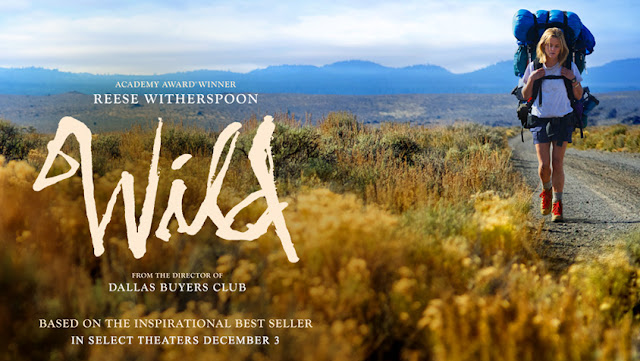 After watching her mother lose a battle to cancer, Strayed turns to a life of drugs, alcohol and promiscuity that wrecks her marriage and nearly destroys her.  The solo hike is a last ditch effort to regain her life back, face her demons, and search inside herself for peace. Along the way she will meet other hikers, all whom are searching for something within themselves. On the trail, everyone is alone with their thoughts and memories and only the truly determined will persevere.

"If there is one thing I can teach you, it's how to find your best self." ~ Bobbi, Wild

While Witherspoon did a remarkable job as Strayed, it was Laura Dern's portrayal of Strayed's mother, Bobbi, that really won my heart. A remarkably strong woman, the memory of Bobbi is what ultimately gives Strayed the courage to continue her journey and recognize that life is what we make of it and we don't always know why things happen the way they do.  She will also learn that "her wounds came from the same source as her power" as was so eloquently said by poet Adrienne Rich and quoted in the film.


Beautifully shot and powerful in its delivery, Wild is a must-see for anyone who has ever felt lost.  I don't believe I have ever considered reading a novel AFTER watching its film adaptation, but this is one I plan to make the exception for.  The film is rated R for sexual content, nudity, drug use and language.