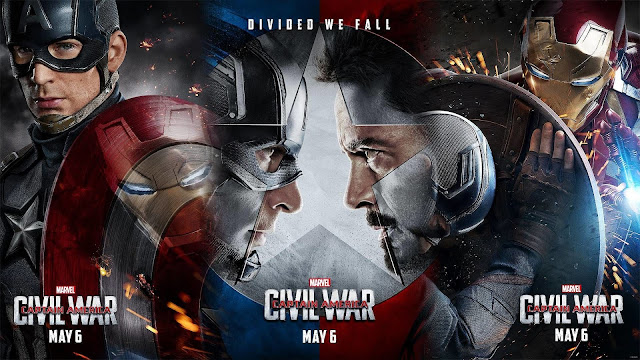 I am just going to cut to the chase. Captain America: Civil War is the BEST AVENGERS FILM EVER! Over the last couple of years, I have really enjoyed becoming quite the Marvel geek and the Avengers franchise is my favorite. I am so glad that I limited my exposure to trailers, commentaries, and spoiler alerts and went in with little knowledge about the story line.

"We're outside the law on this one. So, if you come with us, you're a wanted man." ~ Captain America: Civil War

First and foremost, what parents need to know: Captain America: Civil War is rated PG-13 for extended sequences of violence, action and mayhem.  To elaborate, this film includes intense scenes of mass destruction and explosives, gun violence, physical combat, and loss of life. In addition, there is some brief language. As with every other superhero film I've reviewed, parents need to consider the rating carefully before bringing young children. Also, the film is long - nearly two and a half hours. Lastly, the story line will be over the heads of younger audiences so I recommend this film to those at least 10 years old and up.  My suggestion is to stick to the Lego versions for younger children.

For viewers who may not be familiar with the characters and franchise, this film may be difficult to completely understand (but still enjoyable). Some backstory is provided, but not enough to fill in all the gaps for newbies. I am very grateful I have gone back and watched most of the Avengers films and have a son to brief me on what I need to know that I don't already.

For the appropriate audience, Civil War will surely prove to be a crowd favorite. I am going to tiptoe around certain elements and plot points so as not to spoil anything.

The Avengers once again find themselves on the cusp of controversy when their "heroic" acts create chaos and death causing public opinion to label them as dangerous vigilantes. They are given an ultimatum by the State Department: dismantle their organization or allow the United Nations to supervise their every move. Failure to comply will subject them to criminal prosecution.  Unfortunately, Captain America (Chris Evans) and Tony Stark/Iron Man (Robert Downey, Jr.) do not see eye-to-eye on what should be done forcing the other Avengers to choose sides. Decades of jealousy and subtle rivalry between the two men are about to come to a head. In the middle of the controversy, is Bucky, aka Winter Soldier (Sebastian Stan), who Captain America has a deep-seated connection with.

Fighting against each other, both sides are forced to recruit some help. Enter Spider-Man (Tom Holland - who was fabulous!) and Ant-Man (Paul Rudd)!! While the absence of Hulk and Thor did not go unnoticed, these two more than made up for it, adding much comic relief. Probably the most anticipated appearance was from Black Panther (Chadwick Boseman) whose personal motives quickly made him a fan favorite.

The characters are forced to face conflicts with their loyalties as well as confront the forces of all-consuming revenge. I was happy to see Stark finally learn some humility. The action will keep you on the edge of your seat and the banter between characters is what always makes these films so fun! Also look for a sexy kiss between two characters, and stay for the final scene after the initial credits.