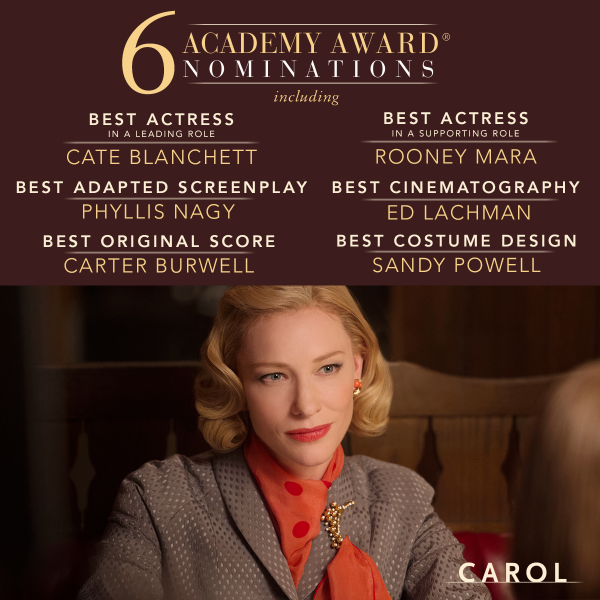 "No explanation I offer will satisfy you. You seek resolutions because you're young, but you will understand this one day." ~ Carol

Based on the novel, The Price of Salt by Patricia Highsmith, Carol, set in 1950s' Manhattan, shows how nearly impossible it was for these two women to be together. Homosexuality, especially for women, was a taboo subject and those that faced the stigma of their sexuality had to suffer unbearable consequences.

When the two women meet in a department store where Therese is working, the chemistry between them is instantaneous and soon proves to be more than a school-girl crush for the young clerk. Despite all the odds stacked against them due to the prejudices of society, their friendship quickly escalates into a truly beautiful love story, demonstrating that there are no chance meetings in life. However, not all love stories have a fairy tale ending.

"Everything comes full circle. Be grateful it was sooner rather than later." ~ Carol

Blanchett gives a powerful and heartfelt performance, perhaps the best of her career, of a mother torn between her daughter and the woman she loves. All the while she is going through a difficult divorce from a man who will stop at nothing for revenge. Under allegations of misconduct and immorality, Carol must choose between her heart's two desires.

The film is slow moving at times relying on dialogue more than action, and, at times, saying as much without words as with them. However, Carol is a beautifully shot film, truly mesmerizing and very sensual, and is much deserving of the recognition it received for its cinematography.  In addition to the statement the film makes about being homosexual during this very different time, the film is also a commentary on the sacrifices of motherhood and women in general. Overall, I liked the film, mainly for how well done it was and for the performances of both Blanchett and Mara, who shockingly didn't take home the Oscar wins.

Carol is rated R for a scene of sexuality/nudity and brief language.