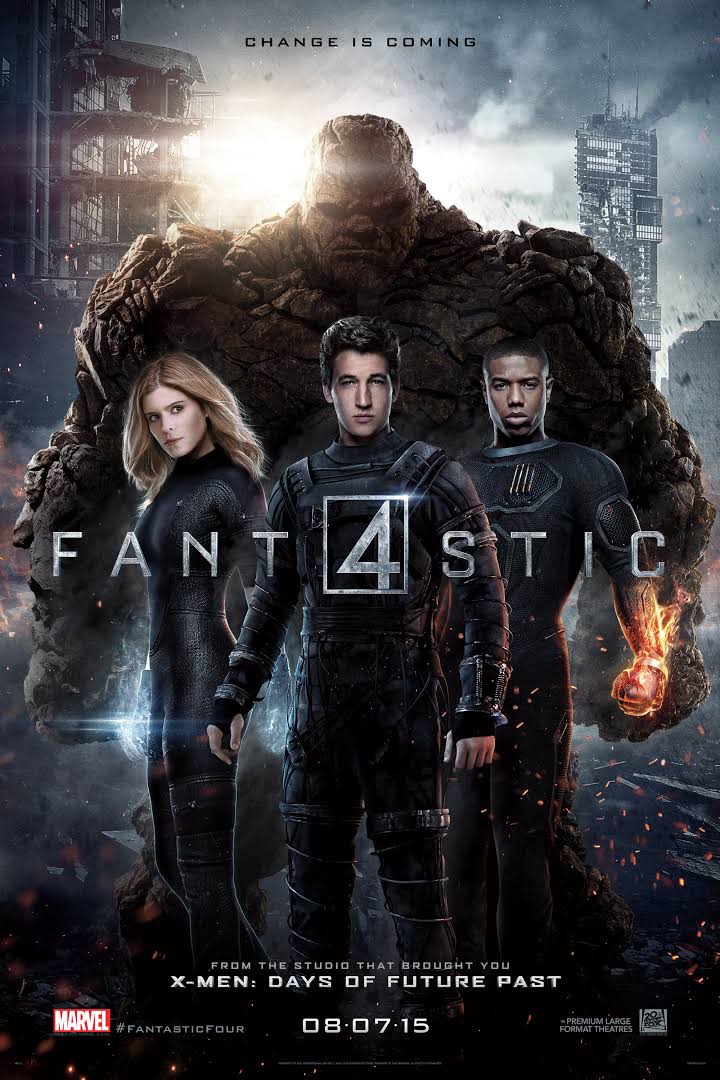 Considering this was opening weekend for Fantastic Four and only playing in one theater at the multiplex, the attendance was low.  Perhaps because the film is being received with mixed reviews or because there aren't any big name stars. Maybe people are just Marvel-ed out, but I doubt that. Fantastic Four was just very different than other Marvel summer hits. The big question,then, is - Is this film right for your family?

WHAT PARENTS NEED TO KNOW: The film is rated PG-13 for sci-fi action violence (some gruesome) and language (quite a bit and some non-verbal). There are many scenes that are too intense for young viewers AND, quite frankly, many others that are too disturbing. I suggest parents use serious caution when deciding whether or not to take their children. This film has been advertised on popular children's television networks for months and frankly, I don't get it.  Not only is Fantastic Four inappropriate for these reasons, the core content would prove over the heads of young viewers.

The film is a scientific look at the birth of Marvel's Fantastic Four and the creation of super-villain Dr. Doom. Unfortunately, before the film gets to any of the Superhero action, we must sit through over an hour of science-technology talk. Don't get me wrong.  I found it all fascinating, but don't take your young kids expecting the heroic actions of the Avengers or Ant-Man. This is a much darker film.

The story begins with a young Reed Richards trying to become the first person to build a teleportation machine. Reed spent his entire youth being discouraged, even ridiculed, by parents and teachers. Yet, the child genius along with friend, Ben, spend half their childhood working on the contraption.  They successfully unveil the working invention at a high school science fair where they receive the attention of Franklin Storm,director of the Baxter Institute, a very unique science facility.

It is here that Reed meets Susan, Johnny, and Victor. Together they perfect the teleportation device, known as the Quantum Gate Project, that is able to transport matter to another dimension, later named Planet Zero. This alternate universe has the potential to provide humans with resources that would help them change the course of history and save earth. But when things go wrong, the survivors find themselves transformed and with out-of-this-world superpowers. The U.S. military is quick to use these subjects for their own gain while continuing the research on the Quantum Gate Project and Planet Zero. No surprise, right?

We are left with the questions of whether or not earthlings deserve their fate. Are we even worth saving?

"It's not enough to ruin your world. Now you want to ruin mine." ~ Dr. Doom, Fantastic Four

This was only the first chapter of these four superheros. Expect a sequel or two in the future. My 11-year old enjoyed the film but not nearly as much as other Marvel films we've seen. Afterwards he told me he was shocked by the amount of language and graphic images.  It was NOT what he expected either.