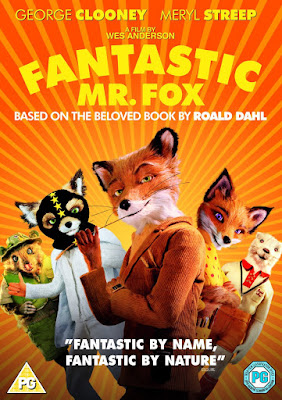 Featuring the voice talents of George Clooney, Meryl Streep, Bill Murray, and Owen Wilson (just to name a few), Fantastic Mr. Fox is a charming adaptation of the children's book by Roald Dahl.   This storybook is brought to creative life through the use of classic stop-motion animation giving this film an entirely different look and feel to other modern day animated films.  Filled with adorable animal critters, and, of course, starring the clever and witty fox, your young children will surely delight in this unusual tale.

When a life of crime (stealing farming birds) lands Mr. Fox and his bride in trouble, he promises his wife he will turn over a new leaf. No more stealing! Instead, he straightens himself up and goes to work as a columnist for a local paper. Yearning for more excitement and dreaming of a better future, Mr. Fox decides to go on one last heist.  Unfortunately, Mr. Fox is blinded by the thrill of success and the glory it gives him among the other animals. So much so, in fact, that he doesn't see how his behavior puts all the other animals at risk. The characters are soon caught in a dangerous game of cat and mouse (although, more accurately, farmer and fox) and facing a rescue mission to save all their lives.

However, behind all the chasing and cute animal antics, there are some very deep life lessons accumulating into one final understanding that our differences are what make us special.  Mr. Fox's son, Ash, is desperately trying to live up to his father's legacy and his cousin's revered abilities. While Mr. Fox, consumed by his own limited expectations of himself and his reliance on others to boost his self-esteem, must come to grips with his self-destructive behaviors as they jeopardize all that he loves. It most certainly is difficult to change, but sometimes our lives depend on it.

Fantastic Mr. Fox is rated PG for action, smoking and slang humor.  For example, there is a reference to the "town tart."  My sons and I saw this film in theaters a few summers ago as part of a free summer series for kids. This time around I was on my own. My older son, now 13, wasn't into it and my younger son was at a sleepover - which is a shame because he likes to make his own stop-animation films and would probably have been able to appreciate the artistic beauty of this film.  Fantastic Mr. Fox is a tender film of proving yourself and discovering your personal strengths. I definitely recommend it to families with young children.