"But I understood why she was crying. Because in the moment I'd felt it , too: sheer, driving terror that the darkness was permanent, that the moon would stop its rotation, that the balance would never be restored." ~ Vanishing Girls 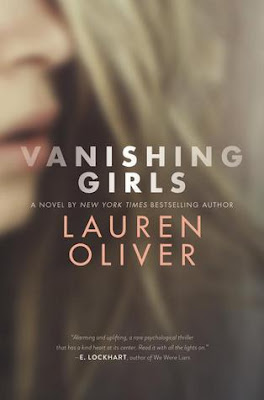 At first, I thought maybe I just started reading this book too soon after finishing my last book. Then, perhaps, I thought maybe I was facing a genre crisis and was simply growing tired of young adult fiction. But eventually I realized that I couldn't make excuses - I just didn't love Vanishing Girls by Lauren Oliver. In fact, I can't even say I liked it.  It truly frustrated the hell out of me, and some elements are unsettling.

First, there was a lot going on.  The narrative was being told by the two main characters, Dara and Nick - sisters that are only months apart in age.  The timeline jumps around too much, and readers have to work really hard to keep it straight in their heads.  Plus, interspersed between their narratives, there are online news postings and reader comments, just like what appears in social media. However, I actually like these and found them quite insightful to read.

"Funny how things can stay the same forever and then change so quickly." ~ Vanishing Girls

Second, I could not develop a connection with either main character. Nick and Dara grew up best friends, despite their many differences. Eventually, under the pressures of high school and their parents' divorce, their differences cause a strain on their relationship.  Sure, there is also a boy involved creating a love triangle. But nothing could have prepared them for the damage the accident would have on their lives and relationship. Sounds promising, right? Unfortunately, the characters were mere cliches - the smart, sensible, plain-Jane older sister, and the shallow, pretty, and popular younger sister who can't stay out of trouble. Neither character had any real depth or originality.

Oliver saved the book from being a total disaster for me by increasing the suspense in the last one-third of the book and an unforeseen twist at the end.  Yet, it was this same twist that caused holes in the events of the story.  I was also pleased that Oliver touched base on a serious concern with underage girls and young woman (sorry, no spoilers!) Overall, though, I had no strong feelings - at least not positive ones - toward Vanishing Girls or its components. Upon finishing it I felt absolutely nothing except grateful that it was over.  It is an easy read with a positive ending (thank GOD I liked the ending, at least.) I am sure there are readers out there who did enjoy this novel. I'm just not one of them.