I was really excited for the 2015 spring release of Dreamworks' Home. Unfortunately, my sons didn't share my enthusiasm and we ended up missing it in theaters. Now available on DVD, my younger son (age 11) and I sat down together for family movie night to view it. 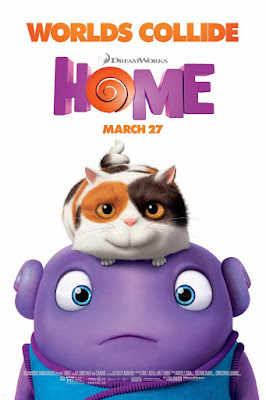 Including the voice talents of Jim Parsons, Rihanna, Steve Martin, and Jennifer Lopez, Home is a very cute movie suitable for the entire family.  However, underneath all the cuteness are some real-life, albeit subtle, political commentaries. Either that or I am really starting to read too much into children's films!

"Humans are more complicated than it said in the phamplet." ~ Home

Home is based on the children's book The True Meaning of Smekday by Adam Rex and is about an alien species, the Boov, who, in an attempt to flee their enemy, the Gorgs, another alien life-form, invade earth and force all humans into controlled colonies - dare I say concentration camps?  The Boovs, although on the surface are adorable and peaceful, actually have major problems with interpersonal relations. They do not have family and form no real friendships.

Oh, played by Parsons, (Have I mention Jim Parsons already??) isn't like the other Boovs.  He doesn't fit in with them, yet he discovers he makes a pretty special human.  When Oh accidentally puts the Boovs and the planet in danger, he becomes a fugitive.  He meets up with Tip (Rihanna), a young human girl who also has trouble fitting in with her peers and has become separated from her mother during the Boov takeover.  Together they try to find Tip's mother AND save the planet from Gorg destruction.

In the end, Oh must decide between friendship and the only way of life he's ever known. We learn that our differences can lead to wrong assumptions and create false illusions of who is good and who is bad (and that's about as political as I will get!)

My son giggled throughout the film, but I'll admit I was a bit disappointed.  To me, the film, although a great story, was saved by Jim Parsons. He was without a doubt the star of the film.  Home is a showcase for his comedic talents. But beware - if you are not a fan of his, that might take away from enjoying the film.  However, Rihanna fans will love the soundtrack performed by the singer.

The end is very sweet and focuses on the gift of hope and, yes, my eyes did tear up. Although not as awesome as the trailer had me believing it would be, I recommend it for family movie night. Home is rated PG for mild action and some rude humor.