The Girl on the Train (Book Review)

People everywhere are talking about The Girl on the Train by Paula Hawkins and with good cause. In Hawkins' first thriller, she takes the reader on an emotional ride as her characters deal with the intense issues of alcoholism, depression, and human relationships. The novel is narrated in the first person by three different characters on two different timelines, which off the bat makes it interesting to read.  The Girl on the Train reminds us that we should never assume we know what is going on behind closed doors. 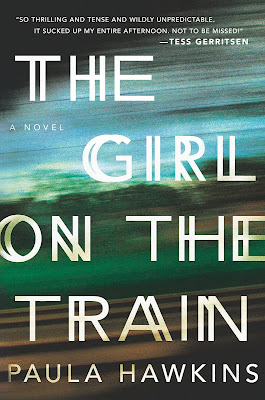 "I have lost control over everything, even the places in my head." ~ Rachel, The Girl on the Train

Rachel takes the same commuter train from her London suburb into the city center every day passing the same track-side houses which sit along the railroad like fish bowls, susceptible to prying eyes. Still dealing with the heartache of her recent divorce, Rachel enviously stares into the home of one couple in particular.  She watches them daily from the train, often seeing their loving interaction on the porch and easily romanticizes their relationship.  But when Rachel sees something she wasn't meant to, her obsession with the couple intensifies.

".......the holes in your life are permanent.  You have to grow around them, like tree roots around concrete; you mould yourself through the gaps." ~ Megan, The Girl on the Train

Megan is at a crossroads in her life, both personally and professionally. As Megan tries to deal with her current crisis, she continues to be haunted by her past. Will she be able to get a handle on things before her past ruins her present life?

"....when you walk down our little street - tree-lined and tidy, not quite a cul-de-sac, but with the same sense of community - it could be perfect......It could be ideal." ~ Anna, The Girl on the Train

Anna, newly married to the man she loves, has what most would perceive as a dream life.  Unfortunately, she is quickly learning that her role as a new mother and wife isn't as glamorous as the visions she previously had of "playing house."  In the end, only Anna can open her eyes and see what her life has become and face an ugly truth that will forever change her.

As these women come face-to-face with their personal struggles, they engage in self-destructive and provocative behaviors that threaten to destroy all that is good in their lives.  One single, seemingly private, moment will forever connect these three women in a way no one would have foreseen. All three women will have to fight their way out of highly dangerous mind games fed by secrets, abuse, and addiction that threaten their personal happiness and transformations.

The Girl on the Train is as addicting as it is suspenseful. I had a difficult time putting this one down. One pivotal part of the story's climax was not entirely unpredictable. However, the manner in which Hawkins unfolds the events keeps the novel exciting until the very end. This book will easily make my list of favorites read in 2015.